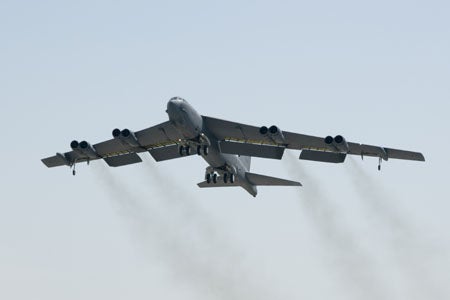 Boeing has received a contract to supply an upgraded communications system for the US Air Force’s (USAF) B-52 Stratofortress bombers, as part of the combat network communications technology (CONECT) programme.

Valued at $76m, the contract covers low rate initial production (LRIP) and delivery of the first CONECT kits, spare parts, as well as maintenance and support services for installation on the aircraft at Tinker Air Force Base in Oklahoma, US.

Representing one of the largest enhancements to the B-52 fleet, the CONECT upgrade will enable aircrew to send and receive information through satellite links, allowing change of mission plans and weapons retargeting during flight, significantly boosting the bomber’s effectiveness and flexibility.

Presently, the B-52 bomber is fed with mission information only prior to and not during its flight.

Boeing B-52 programme director Scot Oathout said: "We are bringing this amazing workhorse of a bomber into the digital age and giving our customer the infrastructure necessary for continued future improvements."

The company will also install an advanced computing network with workstations at each crew position, as well as an integrated digital interphone with enhanced capacity to help aircrew interact with each other, other aircraft and ground forces on headsets with noise-cancelling technology.

Flight testing required for the B-52 CONECT programme to attain LRIP clearance were completed at Edwards Air Force Base in California in December 2011, while Milestone C authorisation was achieved in 2012.

Powered by eight Pratt & Whitney TF33-P-3 turbofan engines, the Boeing B-52 Stratofortress is a long-range, subsonic, strategic bomber designed to carry and fire both nuclear and conventional munitions for deterrence missions.

The aircraft first entered service with USAF in 1955, and is also operated by the navy in support of anti-surface and submarine warfare operations.

System installation under the contract is scheduled to start in late 2014.

Image: A CONECT upgraded B-52 Stratofortress on its way to flight testing at Edwards Air Force Base in California, US. Photo: Boeing photo by Beverly Nowak.