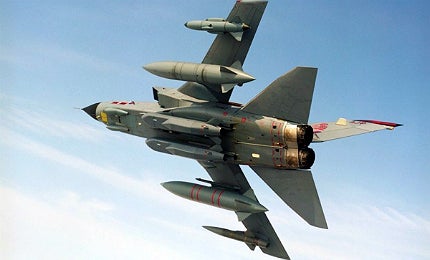 With defence budgets slashed, the drive to maximise the capability that dwindling resources can buy has inevitably grown. It is hardly a new problem; military procurement has always been plagued by the need to meet existing and projected operational requirements, as well as anticipate the inherently un-anticipatable demands of an unknown future, while simultaneously trying to adhere to time and cost constraints. Today, however, the pressure is increasing like never before.

Balancing those demands in the current financial climate calls for a radical rethink of approach, and as Britain, in common with other nations, embraces ever-closer multinational integration at strategic and operational levels, greater collaborative procurement emerges as one obvious potential solution.

While freely acknowledging the chequered history of that approach, at February’s Institute of Strategic Studies conference on international cooperation and reform in defence acquisition, UK Chief of Defence Materiel, Bernard Gray, also alluded to some of the notable successes it can bring. Topping his list was Storm Shadow – the RAF’s conventionally armed stand-off missile (CASOM).

"With defence budgets slashed, the drive to maximise the capability that dwindling resources can buy has inevitably grown."

A fire-and-forget, air-launched cruise missile, with a range in excess of 250km, and able to navigate autonomously using GPS and digital terrain profile matching to attack a range of high value static targets, Storm Shadow gives the UK one of the most advanced weapons of its kind in the world. Take away the names, however, and strip out some nation-specific features, and Britain’s Storm Shadow and the French SCALP truly are brothers under the skin – forged in a unique bi-lateral cooperation to agree a joint requirement for both nations, and then task a supplier with meeting it.

Matra BAe Dynamics – then a joint BAe / Lagardere company, and now part of MBDA – developed Storm Shadow / SCALP, with separate subsidiaries in each country acting as the prime contractors on their respective national version.

It was an arrangement that had novel commercial dimensions as well as procurement benefits, and Gray spoke of the "collective trust" between all parties that made it possible – but he also urged the examination of one very important issue. "Consider why this approach has not been successfully replicated more often. It is, after all, over ten years since Storm Shadow was ordered."

"International cooperation will remain an important component of the British and European procurement."

Dr Henrik Heidenkamp, defence, industries and society research fellow at the Royal United Services Institute (RUSI) explains that the defence white paper of February last year postulates a preference for bi-lateral co-operation, and significant scepticism of multinational collaborative procurement projects consisting of more than two or three stakeholders. He says that many European countries, including France and Germany, are similarly sceptical, but suggests that the problems experienced with such projects in the past were not due to their multipartner aspect alone.

"Apart from the rhetoric of some politicians, at the practitioners’ level its seems to be acknowledged that a significant share of the cost and time delays as well as the lower-than-planned requirement-match must not be attributed to the multinational character of the procurement but to the little understood and / or accepted technological risk inherent in complex projects, as well as to inefficient acquisition structures and processes."

He believes that international cooperation will remain an important component of the British and European procurement, especially for large, technologically complex, big-ticket projects – such as a next-generation main battle tank – which cannot sensibly be realised by a single state. "In short, when the UK Government faces the decision how to conduct a large defence acquisition project, the pressure will be high to seriously consider both the bi-lateral and multinational procurement choice, with the former potentially turning into the latter as the projects advance."

There is also the question of how new approaches to materiel acquisition will affect the British defence industry. In their submission to the recent UK Select Committee on Defence manufacturing, Dr Robert Dover and Professor Mark Phythian (Universities of Loughborough and Leicester respectively) wrote: "The February White Paper broke the historic link between UK defence procurement and UK based defence manufacturing. This is a serious blow to those manufacturers without a well-developed presence in third country markets."

Heidenkamp broadly echoes this, pointing to the need for government to provide sensible and timely answers to highly complex, fundamental questions as part of a coherent defence industrial policy framework. Can, he asks, any country in the modern world be recognised as a leading military power, capable of independent action, without having a sizeable and capable defence industry within its borders, and what is the optimum degree – and maximum limit – of private sector reliance for that military capability? He says it is also important to consider if, and to what extent, the companies involved should be state-controlled, or owned, and decide how feasible it is to run an open competitive tendering process and then hope that a partnering relationship can be built with the successful bidder.

There is the danger too that the outcome of a competitive tendering process may see one or more of the losers exit the sector. Governments must calculate the likely effects of competition on market structure, and should be focussing more attention on how effective procurement can occur without competition being used, he says.

One of the key features of the Storm Shadow / SCALP programme was how the two subsidiaries were able to take two largely similar, though non-identical, requirements and merge them into one common, technical solution. It has clear benefits for subcontractors, who then work to a single joint specification, but it also helps cut down many of the typical high government overheads of national collaborative projects.

In the current climate of austerity, the attraction of that remains every bit as strong as in those pre-recessionary days of the early 2000s, when these missiles first entered service. Nevertheless, there is understandable political reluctance to abandon entrenched nationalistic thinking and surrender sovereign capabilities to the extent that such projects demand.

In his address to February’s seminar, Bernard Gray defined the success of Storm Shadow and other collaborations in terms of "delivering – eventually – important and versatile capability". With the rise of Smart Defence, and the growing priority given to effective regional security, rather than reliance on individual national capabilities, ultimately they may also deliver an equally important shift in procurement ideology too – but these changes, clearly, take time.

Stealth vs brute force: is the trade-off worth it?

As its future all-stealth fleet of F-22s and F-35s begins to take shape, the USAF has come under heavy friendly fire.