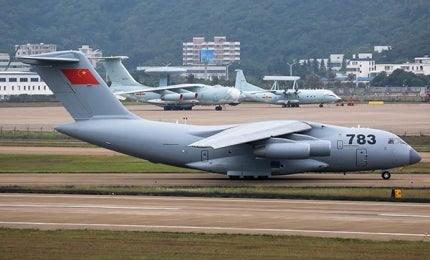 The aircraft can be deployed in the transportation of personnel and heavy equipment during military assault, and humanitarian assistance and peacekeeping missions. It can also be configured for airborne early warning and control (AEW&C), anti-submarine warfare (ASW) and aerial refuelling missions.

"The first Xian Y-20 prototype successfully made its first flight at Shaanxi Yanliang Aviation Base in January 2013."

The first Xian Y-20 prototype successfully made its first flight at Shaanxi Yanliang Aviation Base in January 2013. The second prototype took into skies in December 2013. The aircraft was displayed at China International Aviation & Aerospace Exhibition 2014 (Airshow China) held in Zhuhai.

The Y-20 project is part of an initiative to build China’s large transportation aircraft under the Medium-and Long-Term National Science and Technology Development Programme 2006-2020 (MLP).

The aircraft features deep and wide fuselage for cargo section and T-tail empennage configuration with high-mounted horizontal surfaces on the vertical stabiliser. The centre fuselage is hinged with moderately sweptback, high-mounted monoplane wings integrating triple-slotted trailing-edge flaps. A pair of engine nacelle is fitted under each wing.

The Y-20 airlifter has a glass cockpit, which accommodates three crew members. It features a rear cargo-loading assembly allowing the loading / unloading of large-sized cargo and equipment.

The aircraft measures 44m to 47m in length and 18m-high, and has a wingspan of 50m. The maximum take-off weight of the aircraft is approximately 220t and the maximum payload carrying capacity is 66t.

The power plant of the Y-20 prototypes integrates four D-30KP-2 turbofan engines, whereas the production aircraft is equipped with WS-20 engines. WS-20 is the most powerful aircraft engine developed by China.

The engine develops a power output of 14t and offers a higher bypass ratio for fuel efficiency. It will replace the less powerful and less efficient Russian D-30KP, which generates 10.5t of thrust. The WS-20 turbofan underwent trail on Il-76 test aircraft during 2014-2015. The aerial testing was concluded in 2015, paving the way for service entry on Y-20 aircraft.

The Y-20 aircraft can perform missions in adverse weather conditions and can also land at small airports in mountainous regions.

The aircraft is equipped with a retractable landing gear comprising two main landing gear units and a nose unit. Each of the two main units on either side of under-fuselage features six wheels, which are arranged in a two-two-two layout from front-to back.