“Fuelled by military fuel JP-7, the scramjet engine of X-51 is designed to run for five minutes (300s).”

The aircraft was developed to meet the requirements of the US Air Force (USAF) as part of the WaveRider programme. The programme envisages design and development of demonstrator aircraft for the USAF.

The X-51 is principally used to demonstrate the speeds and various aspects of hypersonic flight. It is developed to demonstrate a reliable system adequate to jet fuel and accelerate through multiple Mach numbers. The maiden flight of the aircraft was completed on 26 May 2010. The aircraft remained in air for 200 seconds at a top speed of Mach 5.

Fuelled by military fuel JP-7, the scramjet engine of X-51 is designed to run for five minutes (300s), while the unmanned experimental supersonic aircraft X-43 is fuelled by hydrogen and runs for just 100s.

Researching the air-breathing system-level potential of scramjets through multiple flight tests will cost around $7.7m.

The X-51 is being developed to operate at speeds of more than Mach 7 (8,575km/h) at an altitude of 50,000ft. The number of flight tests was increased by AFRL from four to six, with flights at four to six-week intervals, assuming no failures.

“The X-51 is designed as a missile-size demonstration aircraft to showcase scramjet operation from Mach 4.5 to Mach 6.”

On 14 December 2009, the first captive flight was carried on the B-52 bomber aircraft from Edwards Air Force Base with the unmanned craft snugged under a wing.

During the first hypersonic flight test, conducted on 26 May 2010, the B-52 bomber aircraft carried the Scramjet demonstration aircraft to 50,000ft above the Point Mugu Naval Air Warfare Center Sea Range, from where it was released. An army tactical missile system (ATACMS) solid-rocket booster burnt and propelled the X-51 to achieve Mach 4.5 speed.

Following this, the booster was thrown away and the X-51A’s SJY61 supersonic combustion ramjet propulsion system ignited the ramjet engine and impelled the vehicle to fly at an altitude of 70,000ft at a top speed of Mach 5 for 140s.

Wind tunnel tests and modelling were performed during this test to assure the safe separation of the vehicle from B-52.

The on-board sensors equipped in the vehicle transmitted the data to ground systems located at Point Mugu, Edwards Air Force base and Vandenberg Air Force Base before the flight was terminated.

The ground station operators reviewed the data and identified that the vehicle failed to fly at Mach 6 speed due to quicker acceleration at an altitude lower than expected, as well as unexpected temperatures and pressures in the internal sections of the scramjet.

The second test flight of the vehicle took place in June 2011. The X-51 was dropped from the Boeing B-52 Stratofortress over the Pacific Ocean. The aircraft failed while approaching Mach 5 speeds due to an inlet un-start.

In August 2012, the third hypersonic flight test was conducted with the goal to achieve Mach 6 speed for five minutes. The X-51 was launched by the B-52 from an altitude of 50,000ft. The test failed due to problems with the control fin which caused the aircraft to lose control and crash after 16s of launch 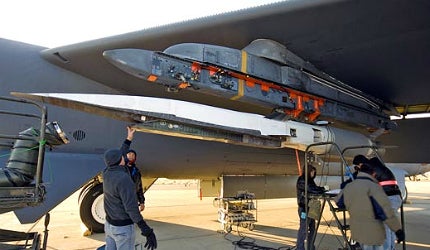 The X-51 is designed as a missile-size demonstration aircraft to showcase scramjet operation from Mach 4.5 to Mach 6.

The lifting body design provides the vehicle with a substantial amount of lift for flights without being dependent on the wings.

The aircraft weighs about 1,814kg and is designed to be fully controlled in supersonic speeds, even when gliding without propulsion.

When the X-51 travels at high speeds, the increased heat can damage the metal portions of the airframe by melting them.

In order to avoid damage, the hypersonic combustion is used to produce cycling water behind the engine cowl and sidewall edges, thereby cooling the surfaces. As a result, the engine is maintained at the required operating temperature.

Turbine engine on the US Air Force’s aircraft

When the engine is ignited, a mixture of both ethylene and JP-7 is burnt before switching solely to JP-7 fuel.

Successful tests of Boeing’s X-51A Waverider aircraft have given new blood to the scramjet concept.