Expand
Phantom Eye, from Boeing, made its maiden flight in 2012.
Boeing's Phantom Eye can fly at a cruise speed of 277km/h.
US defence forces plan to deploy the Phantom Eye UAV in Afghanistan. 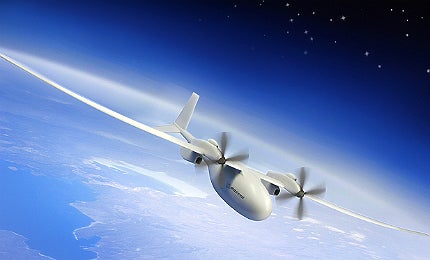 A high-altitude long-endurance (HALE) unmanned aerial vehicle (UAV), Phantom Eye is designed and manufactured by Boeing Phantom Works, US. The UAV will perform intelligence, surveillance and reconnaissance (ISR) missions in Afghanistan for defence forces of the US. It is the first fixed-wing UAV to utilise a liquid hydrogen fuel system.

The maiden flight of the Phantom Eye took place in June 2012. The second flight test was completed in February 2013. Flying at a maximum altitude of 65,000ft (19,812m), the UAV can provide its operators with real-time intelligence data by performing surveillance, reconnaissance and communication across a large area.

The UAV was derived from its predecessor, the Boeing Condor, which had recorded highest altitudes and endurance tests in late 1980.

"The maiden flight of the Phantom Eye took place in June 2012. The second flight test was completed in February 2013."

Phantom Eye is designed to operate in the stratosphere over a specific area. It can be used for both military and commercial applications by making a few modifications in the payloads. About 60%-70% of the UAV is designed as an objective system.

The UAV can carry 450lb (204kg) of payload and its wingspan is 150ft (46m). The fuselage circumference can be increased to accommodate two 2.4m diameter hydrogen tanks.

The turbo chargers and engine control system completed 80 hours of testing in an altitude chamber in March 2010. The testing has allowed the engine to be fitted on the Phantom UAV. Development of the Phantom Eye began in March 2010, after undergoing five years of technical development.

Phantom Eye was first unveiled to the public on 12 July 2010 at the Boeing facility in St Louis, Missouri, US. It was transferred to Nasa’s Dryden Flight Research Center at Edwards Air Force Base in September 2010 to carry out ground and flight testing. The ground vibration and structural mode interaction test was conducted in June 2011. The first medium-speed taxi test was conducted in March 2012 at Edwards Air Force Base in California. Phantom Eye is expected to enter in to service in 2013.

The fighter-sized HALE UAV, Phantom Ray, is being developed by the Boeing Phantom Works as an extended version of the Phantom Eye. It will carry a 2,000lb payload for ten days and serve as a test bed for modern technologies.

Phantom Ray was derived from the X-45C programme. The UAV was launched in May 2010 to meet US Air Force requirements and its maiden flight was held in April 2011.

The Phantom Eye UAV can be controlled either manually from the ground control station or through an autonomous mode. It is incorporated with an automatic launch and recovery (ALR) system, which aids in automatic safe landing in the event of communication failure with the GCS.The UAV is equipped with EO (electro-optical) and IR (infrared) sensors. Light rays are converted into electronic signals by electro optical sensors for capturing images, real-time data and videos.

"Phantom Eye was first unveiled to the public on 12 July 2010 at the Boeing facility in St Louis, Missouri, US."

The hydrogen-powered engine is fuel efficient and reduces the carbon footprint by emitting water rather than carbon dioxide or carbon monoxide.

The UAV can fly at a maximum cruise speed of 277km/h. Its maximum endurance is four or eight hours. The maximum take-off weight of the Phantom Eye UAV is 204kg.

Aurora Flight Sciences is the prime contractor involved in the manufacture of wings for the Phantom Eye. Ball Aerospace and Turbo Solutions Engineering are the constructors of fuel tanks and turbochargers respectively. Propulsion controls are developed by Mahle Powertrain.

The Desert Hawk III (DHIII) is an advanced miniature unmanned aerial vehicle (UAV) system designed and manufactured by Lockheed Martin’s Skunk Works team in the US.