UVH-29E is a new vertical take-off and landing (VTOL) unmanned aerial vehicle developed by UAVOS.
The VTOL UAV has a maximum range of 540km.
The command module uses Google Maps demo version with no limitations. Image courtesy of Peter Forret. 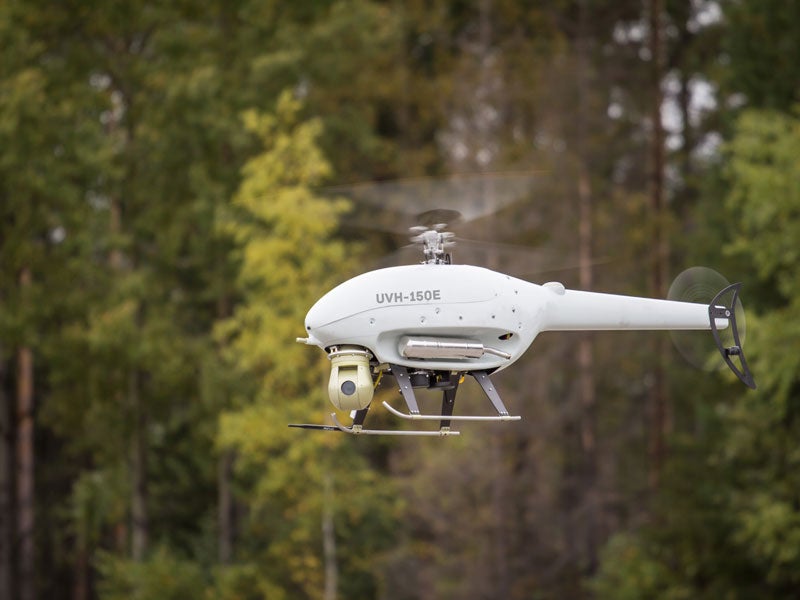 UVH-29E is a new vertical take-off and landing (VTOL) unmanned aerial vehicle (UAV) produced by UAVOS for military and civil operators. The UAV is designed to fly at high altitudes in rough weather conditions. It is intended for signal jamming, surveillance and monitoring, target pointing and designation, as well as radio signal range extension and retransmission missions.

The UVH-29E UAV with extended endurance and interference protection was unveiled at LIMA 2017 exhibition in Langkawi, Malaysia, in March 2017.

The UVH-29E aircraft and the command module are collectively offered by UAVOS as SURVEYOR-H unmanned aerial complex.

The UAV integrates a rotorcraft design, including main and tail rotors. The under-fuselage is fitted with a skid-type fixed landing gear. The UAV has a fuselage length of 1.6m, main rotor diameter of 2m, height of 550mm and wheelbase of 320mm.

The VTOL UAV features a parachute rescue/landing system and requires no additional landing equipment. It can carry a gyro-stabilised micro gimbal integrating a laser range finder and camera system, as well as other payloads such as B/W spotter, sensors, transmitters, re-transmitters and signal jammers.

“The UAV is designed to fly at high altitudes in rough weather conditions.”

The unmanned rotorcraft can perform take-off and landing in less than 5mx5m area. It can be controlled through four modes, including fully automatic, semi-automatic, manual and emergency.

The ability to operate across different temperature ranges and fly in jamming environments of satellite radio signals, and the command line channel make the UVH-29E a highly effective platform for extreme conditions.

The system also comes with a virtual simulator, allowing the operators to train specialists and maintain skill level, as well as conduct trials of flight modes in different weather conditions.

The PGCS has a length of 1,200mm, width of 415mm and a height of 224mm. It has an operational endurance of five hours and can be operated in temperatures ranging between -20°C and 50°C. The portable station can be carried in a backpack.

The UAV is equipped with a two-stroke Zenoah G29E piston engine driving the main rotor system. The rated power output of the engine is 7.2hp. The fuel for the power-plant is supplied from a tank with a storage volume of 3.6l.

The VTOL UAV has a maximum take-off weight of 21.6kg and can steadily take-off and conduct a mission and land in fully automatic mode in rain, snow and wind exceeding 14m/s. It can climb at a rate of 6m/s to reach a maximum static ceiling of 2,500m.

The UAV has a flight endurance of six hours with a payload of 1kg, while flying at an altitude of 1,000m. It can fly at different speeds based on the mission profile. The unmanned helicopter loiters in air at a speed of 0km/h in hover mode and can attain a maximum speed of 150km/h. The operational range of the unmanned helicopter is 540km. The UAV has the time between overhaul (TBO) of 100h.