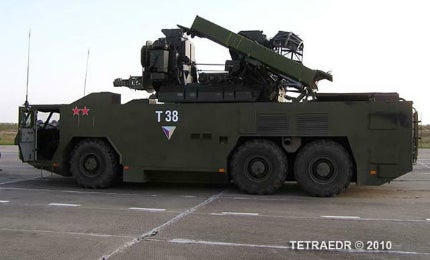 The system, which is a modernised version of OSA-1T ADMS, can be deployed to strike all types of aerial platforms moving at low and medium altitudes. It is integrated with radars to acquire and identify targets while on the move and at halt.

Up to two missiles are used by the ADMS to engage a target from short halt or from stationary position. It can be lifted by an IL-76-class cargo aircraft and transported by rail.

The development of T38 STILET missile system began in 2008. It was later exhibited at the IDEX 2011 (International Defence Exhibition and Conference) in Abu Dhabi as well as at the MILEX 2014 (Exhibition of Armaments and Military Equipment) in Republic of Belarus.

The T38 STILET air defence missile system first performed five live firings at the 174 training test range of the Air Force and Air Defense of the Republic of Belarus in October 2010. It did this using the 9М33М3 missiles. During the tests, the weapons successfully destroyed high-velocity, small-sized IVTs-M1 aerial target simulators.

Tetraedr demonstrated combat mission readiness of the T38 STILET missile system with the 9M33M2(3) surface-to-air missiles during integration tactical military exercise conducted by the Ministry of Defence of the Republic of Belarus in February 2014.

The T38 STILET missile system is mounted on the T381 Combat Vehicle (CV), which is operated by a crew of four. The highly-mobile vehicle features MZKT-69222T self-propelled wheeled chassis driven by a powerful diesel engine.

An electro-optical system is fitted on the vehicle, as is navigation and communication systems, map-positioning, air conditioning and a heating system. It also comes with an automatic launch system and launch device, electric power supply system and functional check and combat crew training equipment. A digital master computer and crew commander’s automated workstation can also be found on-board the CV.

"The probability of killing the target with one missile is 90%."

The T38 STILET air defence missile system can carry up to eight T382 surface-to-air guided missiles in the Transportation-and-Launch Container (TLC). The two-stage, bi-calibre and solid-propellant missile features a power unit consisting of a booster and a sustainer. A radio fuse installed in the missile ensures effective destruction of the target by actuating a non-contact explosion of the warhead.

Targets flying at a maximum speed of 900m/s, at altitudes varying between 25m and 10km, can be destroyed by the missile system. It can also detect targets within a range of 40km, whilst the maximum slant range of target destruction is 20km.

A maximum cross range of 10km can be achieved by the ADMS. The probability of killing the target with one missile is 90%. The system is also capable of detecting targets with minimal radar cross section of 0.03m² and has an emplacement / displacement time of five minutes.

The T38 STILET air defence missile system uses the T383 Transportation and Loading Vehicle (TLV) for loading and unloading missiles to/from containers. It also provides transportation for missiles and temporary storage. The T385 maintenance vehicle is utililised to carry out maintenance of the combat vehicle.