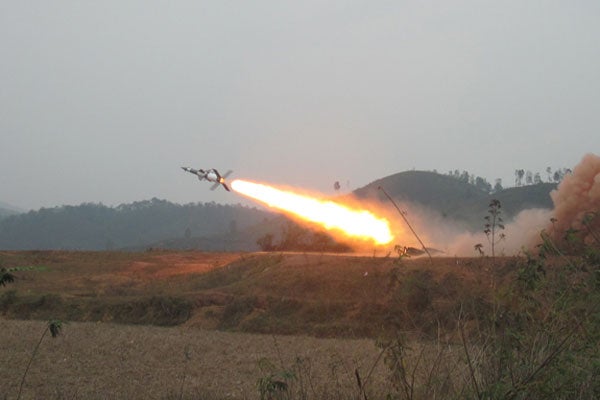 S-125-2TM, also known as Pechora-2TM, is an upgraded version of S-125 / Pechora air defence missile system (ADMS). It is aimed at destroying advanced, small-size aerial attack platforms flying at low altitudes. The ADMS can also be deployed against ground and water-surface targets that are visible to radar.

The missile system is capable of engaging targets in severe jamming environments and can operate independently or integrated into an Air Defence (AD) grouping. It is equipped with a GPS navigation system.

TETRAEDR is responsible for modernisation of the missile system. The company has been supplying upgraded S-125-2TM / Pechora-2TM missile systems to foreign customers since 2006.

TETRAEDR UE was selected in January 2007 to upgrade the baseline S-125 ADMS to S-125-2T standard for use by the Armed Forces of the Republic of Kazakhstan. The company conducted around 97 live test firings of the upgraded S-125-2TM / Pechora-2TM ADMS by 2010. Six successful test firings were completed in April 2011 while three more tests were concluded in May 2012.

The four surface-to-air missiles are carried by the TRV-2TM transportation and reloading vehicle which is based on the KAMAZ-43118 chassis. The 5V27 missile is equipped with high-explosive warhead.

The ADMS can simultaneously strike up to two targets at a speed of 900m/s. The system has a maximum firing range of 35.4km and a maximum cross range of 25km. It can detect targets within the range of 100km and engage targets at altitudes ranging from 0.02km to 25km. The kill probability of the missile system is 92%.

The emplacement / displacement time of the missile system is 25 minutes. The jamming resistance against active barrage jams is 2,700W/MHz.

The air defence missile system can be additionally attached with the P-18T Radar target acquisition and target designation assets.

The antenna post is installed on the special UV-600-2TM automobile trailer and is equipped with command radio transmitter, radio transmitting device, antenna-waveguide system, interfacing and communication instrumentation, and radio receiving devices of the target and missile sighting channels.

"The air defence missile system can be additionally attached with the P-18T Radar target acquisition and target designation assets."

This project forms part of our recent analysis and forecasts of the global missiles and missile defence systems market available from our business information platform Strategic Defence Intelligence. For more information click here or contact us: EMEA: +44 20 7936 6783; Americas: +1 415 439 4914; Asia Pacific: +61 2 9947 9709 or via email.