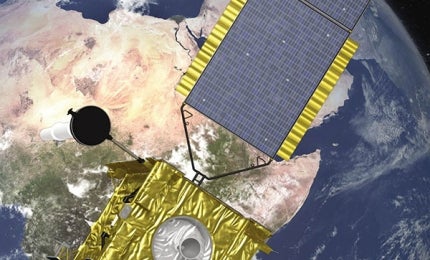 Skynet 5 military communications satellite system is a constellation of four next-generation spacecraft built to meet the needs of the UK Armed Forces and other government organisations.

EADS Astrium (now Airbus Defence and Space) is the prime contractor and lead manufacturer for all the four satellites namely Skynet 5A, Skynet 5B, Skynet 5C and Skynet 5D. The company also owns and operates the constellation on behalf of the UK Government.

The Skynet 5 spacecraft have been placed in geostationary transfer orbit to provide users with secure voice, high-speed and data communications for combined operations in the battlefield, as well as in peacekeeping missions.

In March 2015, Airbus Defence and Space announced that it will reposition Skynet 5A satellite to the eastern Asia-Pacific region in support of humanitarian, disaster, rescue and military operations. From mid-2015, this reorientation of the satellite will deliver reliable communications services in the new coverage area.

Airbus Defence and Space, through its subsidiary Paradigm Secure Communications, was awarded a PFI (Private Finance Initiative) contract worth approximately £4bn (approximately $6.69bn) by the UK Ministry of Defence (MoD) in October 2003 to provide Skynet 5 satellite services up to 2020. The MoD awarded a £400m ($598m) contract in March 2010, extending the procurement of satellite communication services up to at least 2022.

Skynet 5A, the first spacecraft in the constellation, was launched in March 2007. The second and third satellites, Skynet 5B and Skynet 5C, were launched in November 2007 and June 2008 respectively. The fourth and final satellite, Skynet 5D was launched in December 2012.

All four satellites of the Skynet 5 family were lifted into space by Arianespace’s Ariane 5 ECA (Cryogenic Evolution type A) rocket launcher from the Guiana Space Center in French Guiana, South America.

Design and features of Skynet 5 satellites

The Skynet 5 X-band spacecraft are based on the high-power Eurostar E3000 satellite bus manufactured by Airbus Defence and Space. Each satellite is equipped with two deployable solar arrays and batteries. It has a launch mass of approximately 5t and a payload power of 5kW. Mission duration of the Skynet 5 satellites is 15 years.

The satellites can be quickly repositioned to provide improved coverage in the region, based on the user-requirement.

Each Skynet 5 military satellite incorporates advanced technologies and multiple antennae to create global and regional beams. Payloads aboard the satellite include UHF and SHF communications with 15 active channels and extensive channel-to-beam flexibility.

The satellite has four steerable downlinks, one global X-band downlink and one global X-band uplink. Its beyond line of sight (BLOS) capability provides users with enhanced communications, while its multi-beam switching capability ensures transmission and reception of signals in all directions. The steerable spot beams are used to place downlink power in the required region.

The satellite is also integrated with high-power 160W narrow transponders and a military grade system.

The ground segment, built by Airbus Defence and Space, consists of 59 Reacher tactical vehicle-mounted units in different configurations. It is transportable on all-terrain conditions and operable under harsh environmental conditions.

The 50.5m-long Ariane 5 ECA launch vehicle carries up to 20t of payloads to low-Earth orbit and 10t into geostationary transfer orbit. The rocket launcher has a typical lift-off mass of 780t.