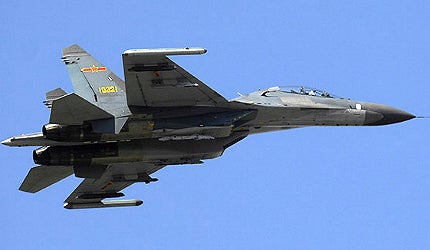 Shenyang J-11, or Jian-11, is a Chinese multirole fighter aircraft manufactured by Shenyang Aircraft Corporation (SAC). It is a licensed-built variant of the Sukhoi Su-27SK (Nato code name: Flanker) fighter. The J-11 is operated by the People’s Liberation Army Air Force (PLAAF).

Sukhoi and SAC signed a $2.5bn contract for the co-production of 200 Su-27SK fighters as the J-11 in February 1996. As part of this contract, Sukhoi was responsible for supplying components to assemble the aircraft at SAC.

Development of the Shenyang J-11

The first aircraft assembled in Shenyang was flight tested in December 1998. Full-scale production was delayed because of technical issues.

About 100 aircraft were manufactured by 2003. Production ceased subsequently, as the basic J-11 variant did not meet the PLAAF requirements.

Sukhoi offered its Su-27SKM fighter to China in 2003. It was a modernised multirole variant based on the Su-27SK. The PLAAF rejected the aircraft in favour of a domestic variant of the J-11.

SAC unveiled a mock-up J-11B aircraft in 2002. It is an upgraded multirole variant of the J-11. The company delivered the first test aircraft to the China Flight Test Establishment (CFTE) for evaluation in 2006.

Design of the multirole fighter aircraft

Designed based on the Su-27SK, the airframe of J-11 is made of titanium and aluminium alloys. The fuselage section integrates the cockpit, radar sections and avionics bay. The basic J-11 version incorporates Russian-made components. The indigenously built J-11B uses the same airframe and is equipped with Chinese-built avionics and weapon systems.

The glass cockpit of J-11 accommodates a single pilot. It is equipped with colour multifunctional displays (MFDs), a head-up display (HUD), helmet-mounted sight (HMS) and an indigenous digital flight-control system.

Armament and weapons on the Chinese aircraft

The PL-12 carries a high explosive fragmentation warhead for a maximum range of 100km. The aircraft also carries an unguided rocket launcher and free-fall cluster bombs.

The electronic countermeasures equipment aboard the J-11 include radar warning receiver, chaff and flare dispensing system and radio jamming transmitter.

The FWS-10A TaiHang turbofan engine was unveiled during the 6th Zhuhai Air Show in 2006. The engine is believed to be similar to the Russian-made AL-31F turbofan engine in terms of technology and performance.