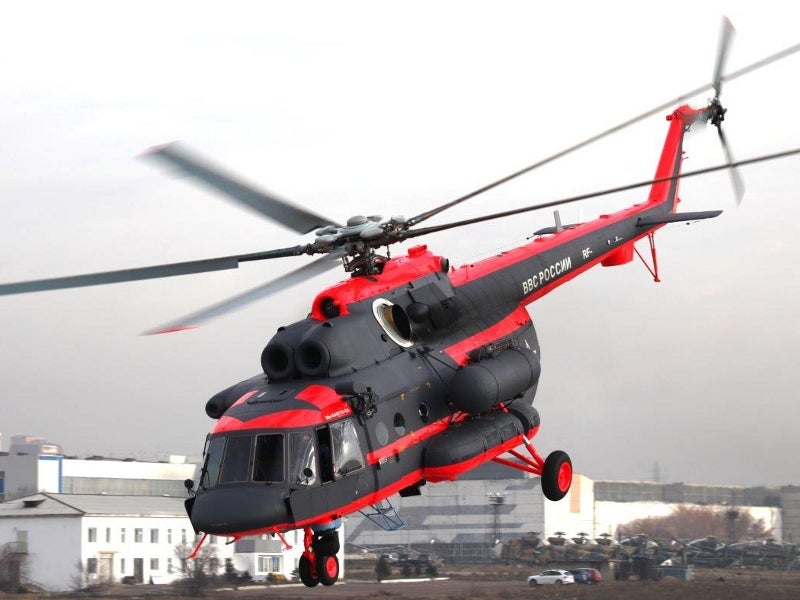 Mi-8AMTSh-VA twin-engine helicopter is specially designed to perform the Russian Armed Forces’ missions in Arctic environmental conditions. It is based on Mi-8AMTSh-V military transport helicopter, a modernised variant of Mi-8AMTSh helicopter.

Built by Russian JSC Ulan-Ude Aviation Plant, the Mi-8AMTSh-VA was inducted into the Arctic units of the Ministry of Defence of the Russian Federation in November 2015.

The aircraft is capable of operating in low temperatures and light conditions and can execute a number of missions such as ambulance, transportation and landing operations, aerial reconnaissance and targeting, and search and rescue.

The helicopter can also be used by oil and gas companies in offshore exploration activities.

Another four Mi-8AMTSh-VA helicopters are planned to be delivered to the Russian Armed Forces by 2020.

Russian JSC UIMDB, a member of JSC KRET, developed and supplied navigation and communications systems for the MI-8AMTSh-VA Arctic helicopter.

The Arctic helicopter has a three-seat cockpit fitted with a digital autopilot, an electronic display system, digital avionics and duplicate satellite systems. The 5.34m-long cargo cabin with an effective area of 12.5m² can house payloads of 4,000kg, whereas the external payload capability is 4,000kg.

With a maximum take-off-weight of 13,000kg, the helicopter can accommodate up to 36 persons, whilst transporting up to 12 wounded on stretchers in ambulance configuration.

Navigation and communication capabilities of Mi-8AMTSh-VA

Airspace observation systems are used to detect incoming threats, while the communications suite provides reliable, un-interrupted radio communication across a range of frequencies.

The night vision equipment provides operators with the ability to operate during low light or night conditions.

For search and rescue missions, the Arctic helicopter uses a radio direction-finding device, which can operate on all emergency frequencies.

It also comes fitted with a weather radar that helps to identify and recognise objects on the ground and sea, both horizontally and vertically, in dangerous weather conditions.

Protection features of the Arctic helicopter

Special covers are fitted to ensure high efficiency of the systems that are used to heat the main components of the helicopter in low temperatures.

“The aircraft is capable of operating in low temperatures and light conditions and can execute a number of missions such as ambulance, transportation and landing operations, aerial reconnaissance and targeting, and search and rescue.”

Engine and performance of Mi-8AMTSh-VA

Powered by two Klimov VK-2500-03 turboshaft engines and enhanced gears, the Mi-8AMTSh-VA Arctic helicopter can operate in challenging weather conditions of Arctic and Far North. It can withstand temperatures lower than -40°С.

The helicopter carries four additional fuel tanks, which enable flying over a range of 1,300km. It also features a TA-14 auxiliary power unit with improved thrust to provide enough power to the onboard heating systems.

The helicopter’s operating capability is further improved with oil and fuel systems and Teflon hydraulic flight control hose. The maximum speed of the helicopter is approximately 250km/h.