More than 12,000 Mi-8 Hip multipurpose helicopters have been produced.
Two Rwandan Air Force Mi-17MDs on test flight prior to delivery.
The Mi-8T military transport helicopter provides mobility to ground force units.
The Mi-17MD Russian market designation Mi-8MTV5.
Troops are accommodated on three rows of seats in the cargo cabin.
The Mi-8MTV5 carrying the Igla (left) and the Shturm (right) guided missiles.
The Mi-17MD carrying cargo with the extended loading ramp.
The helicopters deployed in Chechnya. 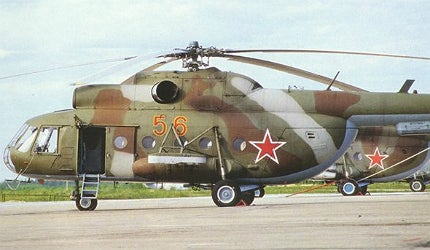 More than 12,000 Mi-8 (Nato codename Hip) multipurpose helicopters have been produced, with more than 2,800 exported, and they are operational with over 50 air forces worldwide.

The accredited production of the Mi-17 began in China in May 2008 by Mil Moscow Helicopter Plant JSC and Sichuan Lantian Helicopter Company, Sichuan. A total of 20 helicopters were built using the Russian Ulan-Ude supplied kits in 2008.

The improved version of the Mi-8 is the Mi-17 Hip multipurpose helicopter, also known as the Mi-8TMB. It is specifically designed for improved capabilities at high altitudes and in hot weather conditions.

The Mi-17 is identifiable from the Mi-8 by the additional air filters on the turbine air intakes, as well as left hand side mounted tail rotor, required by the more powerful TB-3-117A turboshaft engines it is fitted with.

The Mi-8T military transport helicopter is configured with a conventional pod and boom, with a tail rotor and non-retractable tricycle nosewheel landing gear. The five-bladed rotor is made from aluminium alloy.

The cockpit accommodates three crew: commander, navigator and flight mechanic. The cockpit and the main cabin are heated and air conditioning is optional. An oxygen system is provided for the crew and for casualties in the ambulance and rescue variants of the helicopter.

The survivability features of the Mi-8 include crew cabin armour plating, explosive-resistant foam filling in the fuel tanks, a fire-fighting system and duplicated and standby hydraulic and power systems and main control circuits. De-icing systems are installed.

The helicopter’s landing-transport equipment can be used to load light towed combat material and armament via winches and to rescue people from the ground or from the sea by an electrically operated hoist (200kg capacity).

The cabin has cargo tie-down points on the floor. Ramps are provided for loading vehicles. The cabin can accommodate twelve litters (stretchers). The external cargo sling is rated to carry 3,000kg.

The Mi-8T helicopter is powered by two Klimov TV2-117 turboshafts engines. Deflectors are installed on the engine air intakes to prevent ingestion of dust when taking off from unprepared pads. The helicopters also have an auxiliary power unit (APU) for self-contained operations.

The helicopter carries 1,870l of fuel in two flexible internal tanks and two external tanks. The total fuel capacity can be increased to 3,700l by installing up to two ferry tanks in the cabin.

The armed Mi-8TV helicopters are fitted with more powerful TV3-117VMA engines, which give an improved hovering ceiling (3,950m compared to the 1,760m of the Mi-8MT). The maximum slung payload of the armed helicopter is increased to 4,000kg.

A Hot Brick infrared jammer can be fitted, and six ASO-2V flare dispensers are installed: three to the port and three to the starboard side of the fuselage.

The Mi-8MPS search and rescue helicopter was developed from the military transport helicopter. In rescue missions, the helicopter crew drop radio-beacons to mark the distress area and deliver rescue teams to aid and recover the casualties.

The helicopter can lift ten people at a time on a sling via a PSN-10 life raft and is provided with an emergency landing device that ensures buoyancy for up to 30 minutes.

For spacecraft recovery the Mi-8MPS helicopter delivers operational and technical groups with rescue equipment to the landing zone.

Instrument and visual search methods are used to locate spacecraft returning from space missions and parachuting into landing zones. The helicopter is used to recover the cosmonaut and return him to base. Space objects weighing up to 3,000kg are transported by sling to the nearest aerodrome.

The Mi-17 can climb at the rate of 8m/s. The maximum and cruise speed of the helicopter are 250km/h and 225km/h respectively. The range of the helicopter is 465km and the service ceiling is 6,000m. The aircraft weighs around 7,489kg and its maximum take-off weight is 13,000kg.

In December 2005, the Czech Army received 16 Mi-17SH helicopters as part of a debt settlement with Russia. These helicopters have been donated to the Army of Afghanistan. The first three were handed over in December 2007.

In July 2002, Kazan signed an international marketing agreement with BAE Systems of the UK and Kelowna Flightcraft of Canada for an upgraded version, the Mi-172 medium-utility and transport helicopter. The Mi-172 has a new mission system from BAE Systems Avionics, new glass cockpit with Honeywell electronic flight instrument system and BAE Systems’ Titan 385 stabilised multisensor turret. The upgraded helicopter has been ordered by the Kazakhstan Air Force.

In 2007, Croatia placed an order for ten Mi-171Sh helicopters as part of the discharge of debt owed to Croatia by the Russian Federation. The first two were delivered in December 2007.

Russia announced in June 2010 that it intends to deliver MI-17 helicopters to Afghanistan under Nato contract as part of US-run tender for providing the helicopters to the Afghan Army. The Royal Thai Army announced a deal to buy six Mi-17s in October 2008.

The US gave four Mi-17 helicopters to Pakistan to assist its anti-terrorism activity in June 2009. The US Navy delivered four Mi-17s to the Afghan National Army Air Corps in September 2009. The Afghan Air Force (AAF) received ten Mi-17-V5 helicopters by December 2010. Russia signed a $171.4m contract with the US Army in July 2012 to deliver ten more Mil Mi-17V-5 helicopters for the AAF. The Ministry of Defense plans to induct 21 additional helicopters to bring the total Mi-17 fleet to 56 by 2013.

India ordered 80 Mi-17-V5 helicopters in December 2008 as part of a $1.34bn contract. It ordered an additional 59 Mi-17s in August 2010. Deliveries to the Indian Air Force (IAF) along with spare parts and associated equipments began in 2011 and are expected to be complete by 2014. The first batch of helicopters was inducted into the IAF in February 2012.

In July 2012, Sri Lanka placed an order for the delivery of 14 Mi-171 helicopters for the country’s Air Force.

In September 2012, Rosoboronexport signed a contract with Chinese company Poly Technologies for the delivery of 52 Mi-171E helicopters to the China People’s Liberation Army Air Force (PLAAF) by 2014.