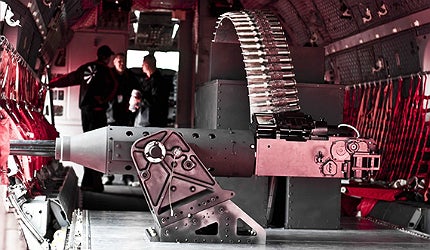 MC-27J is a new multimission transport aircraft jointly produced and marketed by Alenia Aermacchi and ATK. It is a roll on/roll off (RO/RO) aircraft based on the C-27J Spartan. The MC-27J is an affordable alternative to the current special-mission aircraft.

Alenia unveiled a new version of the C-27J Spartan battlefield air-lifter, the MC-27J, at the Farnborough International Air Show in July 2012. The MC-27J is a multirole, armed, RO/RO variant of the C-27J.

The MC-27J is designed to support air forces and Special Forces involved in the tactical transport, intelligence, surveillance and reconnaissance (ISR) missions, anti-terrorism operations, the evacuation of military and civilians from crisis zones and the fight against asymmetric threats.

Design based on the C-27J

MC-27J is based on the combat proven airframe of the C-27J. The base platform is slightly modified, while the airlift capabilities of C-27J are retained. The new aircraft is incorporated with pallet-based systems for additional mission-specific capabilities.

The MC-27J can be configured to conduct troop / cargo transport, paratroops / material air-drop, medical evacuation (MEDVAC) and VIP / passenger transport. The gun barrel on the aircraft can be removed to allow reconfigurations for other missions. The aircraft also integrates a fire protection system and an ice protection system.

The onboard PaWS (palletized weapon system) provides combat capabilities for the MC-27J aircraft. The PaWS is specifically designed for the ATK GAU-23 30mm cannon and other precision guided light munitions. The system minimises collateral damages. The palletised system can be loaded / unloaded through the rear ramp of aircraft. It can be installed in the aircraft within four hours.

The GAU-23 Bushmaster 30mm cannon mounted on the PaWS RO/RO pallet is a next-generation chain gun. The gun incorporates battle proven features of the M242 and Mk44 25mm cannons. The gun can fire 30mm x 173mm, PGU-13, PGU-15, and PGU-46 ammunition at a rate of 200 rounds a minute. The ammunition is fed into the gun through a dual feed system.

The MC-27J serves as an independent command and control centre interfaced with the ground command network. The aircraft is also equipped to provide signal intelligence (SIGINT) intelligence surveillance and reconnaissance (ISR) capabilities. The target identification systems and weapons systems aboard the aircraft support ground missions.

"The GAU-23 Bushmaster 30mm cannon mounted on the PaWS RO/RO pallet is a next-generation chain gun."

The onboard electricity is supplied by three generators. The auxiliary power unit (APU) allows the engines to be restarted in flight during emergency conditions.

The AW129 multirole combat helicopter is the latest variant of the A129 Mangusta (Mongoose) helicopter in service with the Italian Army.