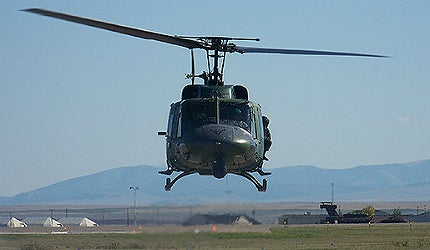 Malmstrom air force base (AFB) is located in Cascade County in the state of Montana, in the US. It lies about ten kilometres from the Great Falls and is home to the 341st Missile Wing of the Air Force Global Strike Command (AFGSC).

It is one of the three USAF bases to have the Minuteman-III intercontinental ballistic missiles (ICBM) launch facilities. The other two bases with similar launch facilities are the Minot AFB in North Dakota and F.E. Warren AFB in Wyoming.

The Malmstrom AFB occupies about 28,606 acres in the Cascade County to the south of Missouri river. The Malmstrom Missile Complex sprawls across 13,800 square miles, through seven counties across the north-central Montana region. It has 150 Minuteman III ICBM silo sites and 15 missile alert facilities.

"It is one of the three USAF bases to have the Minuteman-III intercontinental ballistic missiles (ICBM) launch facilities."

The airbase in the Great Falls region began to shape up with the outbreak of World War II in 1939. Its construction was started in June 1942 and the airfield operations began in November of that year. It was originally called as Great Falls Army Air Base, or East Base.

The Army Air Force Training Command provided training to the Bombardment Groups at the base until October 1943 and participated in critical raids over Germany. The base was expanded with a PX, theatre, hospital, aerial port facilities and a consolidated dinner hall. It was transferred to the Air Transport Command (ATC) which supported the Lend Lease Program for the Soviet Union.

The air base provided aircraft and cargo shipments to fight the German Army until the end of World War II in 1945. Its name was changed to Great Falls Air Force Base in September 1947 with the formation of the US Air Force.

The Military Air Transport Service (MATS) Pacific Division took control of the base in June 1948. MATS reopened the C-54 Flight Training School at the base in 1950. The base was later taken over by the Strategic Air Command (SAC). It obtained the current name in October 1955 to honour the World War II POW Colonel Einar Axel Malmstrom.

The base played a crucial role during the Korean War. All 341 missile wings were redesignated to 341st Space Wing in October 1997, which was re-established as the 341st Missile Wing in July 2008.

Design and construction of the air force base

In December 1959 Malmstrom base was chosen to host the Minuteman ICBM for its strategic location, which lies in the range of the Soviet Union. The SAC was replaced by 341st Strategic Missile Wing (SMW) in July 1961.

Construction of the first ICBM silo (launch facility) at the base was started in March 1961 and its control unit was completed in July 1962. In total ten silos were built by 1962. Another 50 silos were built by Morrison Knudsen Company and Associates in 1965.

The Seattle District of the Corps of Engineers provided the advanced engineering and feasibility studies for the construction of silos (ICBM launch facilities). The project was supervised by the Corps of Engineers Ballistic Missile Construction Office. Del E. Webb Corporation and George A. Fuller Company were the contractors. The solid-fuel Minuteman ICBM I, II and III missiles were later deployed at the base.

A semi automatic ground environment (SAGE) data centre was launched at the AFB in 1959 to support centralised operations. The SAGE was operational until 1983. The base later performed several strategic and support missions and was used as an alternate North American Air Defense Command Center during the Cold War.

All the Minuteman II missiles were removed from the USAF inventory by August 1995. The radar site was closed in 1996. About 150 of the silos have been upgraded to accommodate Minuteman III missiles.

The military unit based at the Malmstrom base is the host unit 341st Missile Wing. The Wing consists of the Operations Group, Mission Support Group, Security Forces Group, Maintenance Group, Medical Group and Staff Agencies.

It operates the installation of ICBM facilities and is tasked to combat nuclear forces. It is part of the Air Force Global Strike Command based at Barksdale Air Force Base in Louisiana. The 819th RED HORSE Squadron is the major tenant of the base and operates through Great Falls International Airport.

The airfield has aircraft operations and maintenance facilities. The 3,500m x 61m runway at the base was closed in January 1997. It was closed due to relocation of the 43rd Air Refueling Group, which operated KC-135R aircraft, following the base realignment and closure commission (BRAC) action.

The flying aircraft posed risks due to proximity of the runway to missile booster and fuel storage facilities, refuelling system, weapons storage area and base housing units. It, however, continues to operate a portion of the flight line and a hangar to serve helicopters for Minuteman III ICBM missile missions. The control tower was levelled and all the navigational equipment remain inactive.

Integrated voice, data and video communications for command and control at the base are provided by Defense Integrated Switched Network. A Defense Data Network and an Automatic Digital Network also support the data communications.