US Air Force, US Coast Guard 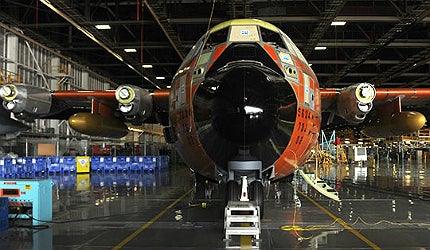 HC-130J Combat King II is a personnel recovery / combat search and rescue aircraft manufactured by Lockheed Martin. It is an extended-range variant of the C-130 Hercules transport aircraft.

The HC-130J is currently operated by the Air Education and Training Command (AETC) and Air Combat Command (ACC) of the US Air Force and the US Coast Guard.

In October 2012, the USCG placed a $218m contract with Lockheed Martin for three additional HC-130Js, bringing the USCG fleet of HC-130Js to nine. The contract also includes delivery of two mission suites to complement the search and rescue operations of the USCG. The deliveries are scheduled for early 2015.

"The USAF placed an order with Lockheed Martin for the delivery of 11 HC-130J Combat King II aircraft in mid-2008."

The HC-130J Combat King II was developed as a dedicated personnel recovery platform as part of the HC/MC-130 recapitalisation programme to replace ageing HC-130P/N aircraft of the ACC. The HC-130J completed its maiden flight in July 2010.

The first HC-130J Combat King II aircraft was rolled out in April 2010. The developmental testing of the HC-130J was concluded in March 2011. The mission capability of the aircraft was certified by the Air Force Operational Test and Evaluation Centre in November 2012.

The HC-130J is designed based on the KC-130J tanker aircraft used by the US Marine Corps. The baseline KC-130J is converted into HC-130J with very minimal modification. The HC-130J incorporates advanced navigation and detection systems.

The crew of the HC-130J includes a pilot, co-pilot, a combat systems officer and two enlisted load-masters.

"The HC-130J is designed based on the KC-130J tanker aircraft used by the US Marine Corps."

The HC-130J Combat King II is equipped with refuelling pods on under-wing pylons and additional internal fuel tanks for conducting in-flight refuelling of helicopters and tilt-rotor aircraft. It can be used for aerial refuelling of up to two rotorcraft simultaneously at night. The aircraft can also participate in forward area refuelling point (FARP) missions in support of joint and allied forces.

The power-plant of HC-130J consists of four Rolls Royce AE2100D3 turboprop engines coupled to four Dowty six-bladed propellers. Each engine generates a thrust of 4,591shp. The operation of the engines is controlled by a full authority digital engine control (FADEC) system.

The Lockheed Martin C-130 is the US Air Force principal tactical cargo and personnel transport aircraft.

The MC-130J Commando II is a special operations tanker aircraft manufactured by Lockheed Martin for the US Air Force Special Operations Command.