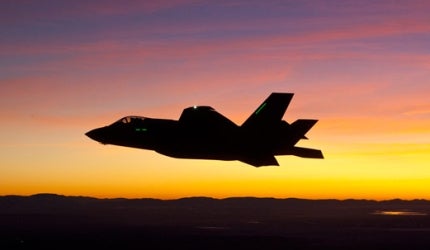 The F-35A is the conventional take-off and landing (CTOL) variant of the F-35 Joint Strike Fighter (JSF) or F-35 Lightning II fighter aircraft. The single-seat, single-engine fifth-generation F-35A was designed and developed by Lockheed Martin Aeronautics for the US Air Force (USAF) and allied air forces.

The F-35A replaces the USAF’s F-16 Fighting Falcon fighters and will supersede A-10 Thunderbolt II attack aircraft by 2028. It is also expected to replace F-15 fighters. In addition, the F-35A complements the F-22 Raptor air superiority fighter.

The F-35A CTOL variant of the F-35 aircraft is designed mainly as a low-visibility aircraft with air-to-ground attack and air-to-air combat capabilities. Turning agility of the aircraft is nine times the force of gravity.

The F-35 Lightning II joint strike fighter (JSF), is being developed by Lockheed Martin Aeronautics Company for the US Air Force, Navy and Marine Corps and the UK Royal Navy.

The F-35A is more affordable as its operation and support is expected to cost 40%-50% less than current-generation aircraft used by the USAF. Another affordability feature of the aircraft is that approximately 80% of its parts are common to other variants of the F-35 aircraft.

Due to its lower logistics footprint, the aircraft can be positioned in an easier way than the USAF’s existing fighter aircraft.

The critical design reviews (CDR) for CTOL variant of the F-35 aircraft were conducted in February 2006. The first flight of F-35A was undertaken in December 2006. The initial production order for two F-35A aircraft was sanctioned in April 2007.

A slightly improved version of the original aircraft was flown in November 2009.

Orders and deliveries of the CTOL variant of the F-35

The first two production aircraft were handed over to the USAF in May 2011. Two more F-35As were delivered in September 2011. The fifth and sixth aircraft, designated as AF-12 and AF-13 respectively, were delivered to the 33d Fighter Wing at Eglin Air Force Base in October 2011.

The F-35A is equipped with an internally-mounted GAU-22/A Equalizer gun manufactured by General Dynamics. This 25mm gun is designed for greater effectiveness against ground targets.

In addition, an electronic warfare suite, designated as AN/ASQ-239, is supplied by BAE Systems and a Multifunction Advanced Data Link (MADL) communication system is provided by Harris Corporation.

In October 2015, BAE Systems placed a $51m order with Cobham to supply microelectronic products for the F-35 Lightning II.

The F-35A CTOL is powered by a single F135 engine (F135-PW-100 variant) manufactured by Pratt & Whitney. The F135 is a two-spool afterburning turbofan type engine capable of producing maximum thrust of 191.3kN and intermediate thrust of 128.1kN.

Eglin Air Force Base (EAFB) is a military training base located 4.8km south-west of Valparaiso, Florida, US.

Edwards Air Force Base (EAFB) is situated 11km south-west of North Edwards, California in the US.