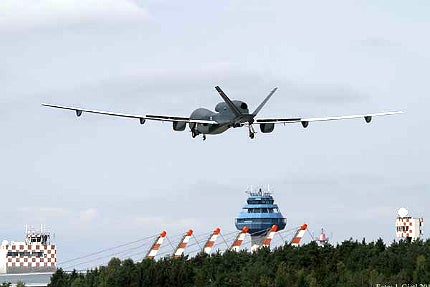 The drone is developed by EuroHawk, a 50-50 joint venture of Northrop Grumman and Cassidian, for the German Armed Forces and Strategic Intelligence Command (KSA).

The drone will replace the fleet of manned Breguet Atlantic aircraft, which retired in 2010 after 38 years of service. Approximately €668m ($822m) was spent on developing the new drone to date.

The programme has been cancelled since May 2013, due to airworthiness and type certification issues.

An additional €600m ($814m) is estimated to be needed for the completion of the drone and to obtain a flight permit for European airspace. An endurance programme for the drone was conducted in August 2013, creating hope for the programme’s revival.

“The drone will replace the fleet of manned Breguet Atlantic aircraft, which retired in 2010 after 38 years of service.”

The Euro Hawk programme began in 2000 with agreements between Northrop Grumman and Cassidian. The drone’s development was commenced in 2005. Rollout ceremony was held in October 2009.

Euro Hawk successfully completed its maiden flight from Northrop Grumman’s Palmdale facility in California to Edwards Air Force Base in June 2010. It also completed a historic ferry flight to Germany in July 2011.

The first signals intelligence sensor test flight of the unmanned aerial vehicle was completed in January 2013 at Manching Air Base, Germany.

The drone flew continuously for 25.3 hours in European airspace during its endurance flight conducted in August 2013. It reached an altitude of 58,600ft over Manching Air Base without being refuelled. It has completed 19 flights and approximately 200 flight hours.

The German Ministry of Defence (MoD) awarded the contract for the development, test and support of the full-scale demonstrator Euro Hawk system to EuroHawk in January 2007. The MoD has ordered four drones, which will be delivered between 2016 and 2017.

Design features of the Euro Hawk

The drone features a larger wingspan compared to commercial airliners enabling it to fly at altitudes of more than 60,000ft for more than 30 hours. The wingspan is 130.9ft, length is 47.6ft and height is 15.4ft.

Gross takeoff weight of the UAS is 32,250lbs and payload capacity is 3,000lbs. On-station endurance is 24 hours.

Northrop Grumman provided a ground station comprising of mission control and launch and recovery elements. Cassidian, on the other hand, provided the SIGINT ground station, which receives and analyses the data from Euro Hawk as part of an integrated system solution.

The drone can be deployed in wide-area surveillance and all-weather target identification and tracking (MTI) missions. It will also be capable of carrying out imagery intelligence (IMINT) and other Nato missions.

“The drone flew continuously for 25.3 hours in European airspace during its endurance flight conducted in August 2013.”

Maritime sensors and equipment can also be fitted.

The drone can also be fitted with European SOSTAR sensor to fulfil the advanced imagery intelligence needs.

Newtec supplied an IP traffic enhancement and shaping solution called Cross-Layer-Optimisation to secure the downlink via satellite once the Euro Hawk has collected information.

The Do-228 is a twin-engine, multirole light transport aircraft designed and developed jointly by Indian aircraft manufacturer Hindustan Aeronautics Limited (HAL) and RUAG Aerospace, Germany. It is derived from a Dornier Do-28 aircraft.