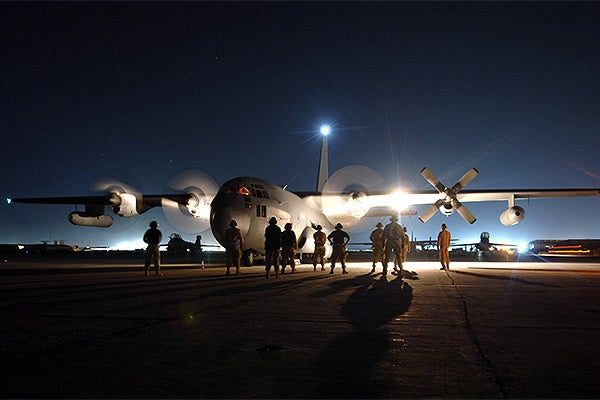 The Compass Call completed 10,400 combat missions and 64,200 flight hours as of February 2014. The USAF intends to procure an additional aircraft by 2016. A total of 14 aircraft have been in service with the USAF’s 55th Electronic Combat Group (ECG) at Davis-Monthan Air Force Base, Arizona, since 2002.

The EC-130H executes electronic warfare, tactical air and countermeasure missions to support the US and Coalition tactical air, surface, and special operations forces. It can extensively deny and disrupt enemy command and control networks. It delivered superior capabilities against enemy command and control links during the military operations in Kosovo, Haiti, Panama, Iraq, Serbia and Afghanistan.

The EC-130H Compass Call airframe is an upgraded version of that of Lockheed Martin’s C-130 Hercules. BAE Systems provided engineering, integration and testing services for the mission systems of the aircraft in addition to providing equipment for low-mid band system. L3 Communications was responsible for the systems integration and depot maintenance.

The AGM-154 Joint Standoff Weapons (JSOW) is part of a family of low-cost, air-to-surface glide missiles manufactured by Raytheon.

The Compass Call made its first flight in 1981 and achieved initial operational capability in 1983. The EC-130H fleet of the USAF consists of Block 20, Block 30 and Block 35 aircraft.

The EC-130H can be easily reconfigured with advanced technologies. The Block 30 modernisation included enhancements to the cargo compartment and operating system software of the Block 20 aircraft.

The EC-130H is further modernised to the Baseline-2 standard to achieve improved precision and electronic attack capability. The upgrades included improvements to the mission system and airframe of the aircraft.

The upgrades to the communication suite included the addition of more multi-asset coordination nets, upgradation of the data-link terminals and expansion of satellite communications connectivity for achieving compatibility with the US Department of Defence architectures. The modernisation effort is part of the spiral upgrade acquisition strategy supported by the Big Safari Program office and Air Force Material Command’s 661st Aeronautical Systems Squadron.

Design and features of the Compass Call tactical weapon system

The aircraft is equipped with advanced communication suite including transmit and receive antennas, and signal acquisition, processing, direction finding and jamming equipment.

"The EC-130H can be easily reconfigured with advanced technologies."

Rockwell Collins was selected by L-3 Platform Integration to upgrade avionics of the EC-130H aircraft including communication, navigation and surveillance / air traffic management (CNS/ATM) systems in May 2013.

Engine and performance of Compass Call