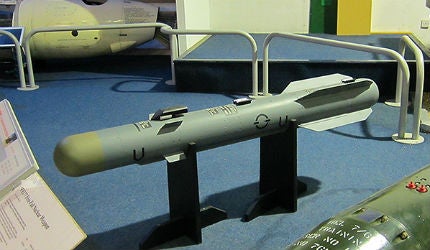 Brimstone is an advanced air-to-ground radar-guided missile developed by MBDA, for the UK Royal Air Force (RAF). The missile can effectively strike fixed and moving ground-based targets, with height accuracy. It was developed based on the AGM-114F Hellfire missile of the US Army.

Brimstone is a fire-and-forget missile capable of destroying long-range targets with minimal collateral damage. It can be operated in all-weather conditions during day or night.

Measuring 1.8m in length and 0.18m in diameter, the Brimstone missile has a weight of 50kg and can travel at supersonic speeds while carrying a tandem-shaped warhead. The missile can engage a wide range of targets such as battle tanks, armoured vehicles and other fast-moving vehicles, bunkers, and naval vessels including fast-attack craft.

"The missile is also suitable for installation on a range of UAVs, ground and surface platforms."

The UK Ministry of Defence (MoD) placed a development and production contract with MBDA to develop an anti-armour missile for the RAF in November 1996. The first batch of Brimstone missiles was handed over in November 2004 and the missile entered into service on the Tornado GR4 aircraft in March 2005.

In October 2005 the missile’s effectiveness against a range of targets was proven during a series of evaluation trials conducted by the RAF at China Lake in the US. The British Air Force released an Urgent Operational Requirement (UOR) in 2007, for an advanced Brimstone missile with a man-in-the-loop feature. MBDA was contracted in August 2007 to supply an upgraded missile named Dual Mode Brimstone (DMB), to the RAF. The DMB missile was successfully fired in Iraq, Afghanistan and Libya against numerous targets.

The DMB missile successfully demonstrated its complete operational flexibility of being deployed against air, naval and land based targets when it is fired from a Tornado GR4 against a target corresponding to a Fast-In-Shore Attack Craft (FIAC).

The DMB missile can be integrated on Typhoon, F-35 Joint Strike Fighter and Future Attack Helicopter. The missile is also suitable for installation on a range of UAVs, ground and surface platforms.

Brimstone missiles were exported to Saudi Arabia for the integration on Tornado aircraft of the Royal Saudi Air Force (RSAF).

The Brimstone missile is equipped with a millimetre wave (MMW) radar seeker for target recognition. The missile features locks-on-after-launch (LOAL) capability and can resist enemy countermeasures.

"The missile can be programmed to search targets in assigned areas to minimise the risk to friendly forces."

The missile can be manoeuvred in three distinguished modes. In mode one the missile uses Semi-Active Laser (SAL) guidance to engage fixed targets with limited or no radar cross-section. The fast moving targets in cluttered environments are destroyed applying SAL and MMW guidance in mode two. The targets can be destroyed employing fire-and-forget armour mode requiring no further input from the operator.

Once launched, the Brimstone missile flies at low level towards the direction of the target by employing onboard navigation systems. The missile uses its radar to differentiate the valid and invalid targets, and its steerable fins lead the missile towards the target. The missile can be programmed to search targets in assigned areas to minimise the risk to friendly forces.

The smaller initial charge of the warhead avoids reactive armour to allow larger and more destructive charge to penetrate the main armour.

Propulsion for the air-to-ground missile

The Brimstone missile is powered by a rocket motor using cast double-base (CDB) propellant. The rocket motor case is made of Steel Strip Laminate (SSL) to resist high temperatures.

MBDA provides an integration solution for the installation on F-35 JSF (Joint Strike Fighter). The missile is interfaced with the aircraft tactical system-reducing workload of the operator.

The AGM-88E AARGM is a medium-range air-to-ground missile developed by Alliant Techsystems (ATK).