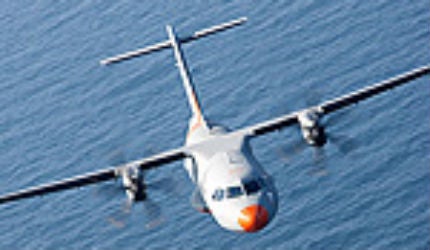 The aircraft helps to detect, locate and rescue people from broken ships and aircraft. It offers cost-effective surveillance and exclusive economic zone patrol and search-and-rescue (SAR).

The equipment installed on the aircraft, such as sensors, communications equipment and mission systems can be customised depending on the mission requirement.

A $137.4m contract was awarded to Alenia Aeronautica in November 2011 for providing logistical support for four ATR 72 MP aircraft of the Italian Air Force.

"The ATR 72 MP serves as a low-cost, consistent, sea-surface surveillance platform for the military forces across the world."

The ATR 72 MP is manufactured with composite materials, which make the aircraft highly resistant to damage and corrosion. The airframe is designed to install sensors and other function-specific modules such as bubble windows and an in-flight operable door.

Compared to its predecessor the ATR 42 MP, this aircraft has significant endurance, more interior space and the latest control systems.

The ATR 72 MP aircraft is equipped with a glass cockpit that integrates five LCD screens as a standard fitment, along with commercial-off-the-shelf (COTS) components for better interface and high resolution graphics.

The 360° operated turret helps to identify targets around the clock using its wide elevation range.

Self protection systems on the ATR 72 MP aircraft include chaff and flare dispenser and a warning system for radars, missiles and lasers. The standard aircraft configuration includes ESM and self-protection systems for reconnaissance and operations in mission critical battlefield.

"The aircraft helps to detect, locate and rescue people from broken ships and aircraft. It offers cost-effective surveillance and exclusive economic zone patrol and search-and-rescue."

The power plant of the aircraft includes two Pratt & Whitney Canada PW 127M turboprops, which each provides a maximum take-off power of 2,750shp.

The engine is fitted with a Hamilton Sundstrand 568F six-blade, variable-pitch propeller.

The aircraft can be operated in extreme weather conditions and altitudes. It features a Hotel Mode, which enables the aircraft to operate from remote bases.

EADS CASA, based in Madrid, supplied more than 478 C-212 aircraft to 92 operators worldwide, including the Spanish and Portuguese Air Forces by the end of 2008.