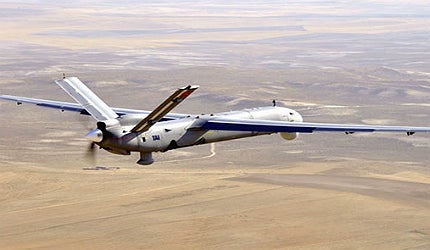 "Under the TUAV project, TAI is responsible for developing three prototype UAVs and the associated ground systems."

In December 2004, TAI received a contract from the Turkish Armed Forces to develop and produce the indigenous MALE UAV system as part of the Turkish Unmanned Aerial Vehicle (TUAV) programme. Under the TUAV project, TAI is responsible for developing three prototype UAVs and the associated ground systems.

The preliminary design review (PDR) was completed in May 2008. Anka was unveiled at the Farnborough Air Show in July 2010. The first Anka UAV successfully completed its maiden flight in December 2010.

The UAV demonstrated its automatic take-off and landing capabilities in November 2011. A technical issue caused the crashing of a prototype vehicle during final tests in September 2012. TAI completed the acceptance testing campaign of Anka in January 2013.

TAI also plans to design Anka Plus A, an armed variation of Anka. The new Anka Plus A is expected to carry Cirit missiles developed by Roketsan.

Anka’s structure is of composite material construction, while some fittings and frames are built using high-strength material to withstand concentrated loads. The fuselage is covered by a mono-block bottom skin. It is integrated with two dedicated payload bays accommodating two primary payloads. The other subsystems including avionics, electrical systems and the engine are housed in various serviceable sections.

The wing and tail components include front and rear spars as well as ribs. The UAV is equipped with dual redundant control surfaces driven by a dedicated electro-mechanical actuator. An electro-expulsive ice protection system (IPS) de-ices the wing and tail leading edges.

Payload of the Anka MALE UAV

The AselFLIR 300T radar system is supplied by Aselsan. The two primary payloads are accommodated in two separate payload bays. The environmental control system (ECS) is used for controlling the temperature of the avionics compartments.

The pusher type piston-prop propulsion system integrates a Thielert Centurion 2.0 turbocharged four-cylinder engine. The engine driving electrical power generators delivers a sea level power of 155hp. It is equipped to be restarted in flight. The propulsion is provided by a three-blade constant speed propeller.

The bladder type fuel tank located in the centre of the fuselage is fitted with fuel level sensors and jet pumps. The fuel is fed in to the engine via a collector tank. The fuel system is also equipped with filters, coolers, pumps and other instrumentation. The engine burns JP8 fuel or the equivalent. The propulsion system provides an endurance of 24 hours at an altitude of 30,000ft.

The NLG integrates shock absorbing components, while the MLG is equipped with spring type retractable struts. The main gear units have electro-mechanic brakes. The nose unit is steered by an electromechanical servo actuator.

GCS for the Turkish UAV

The flight operations of Anka are controlled and monitored using an advanced ground control station (GCS). The GCS is equipped with dual command and control consoles, as well as simulation and playback capabilities. The payloads of UAV are controlled in real time from the GCS during flight.

The GCS is housed in a Nato compliant ACEIII type shelter. It complies with the STANAG 4586 standard. The control station can be interfaced with external command, control, communications, computers and intelligence (C4I) systems.

The T129 is a twin engine multi role attack helicopter being designed and manufactured jointly by Turkish Aerospace Industries (TAI) and Italy-based AgustaWestland to meet the requirements of Turkish Armed Forces.