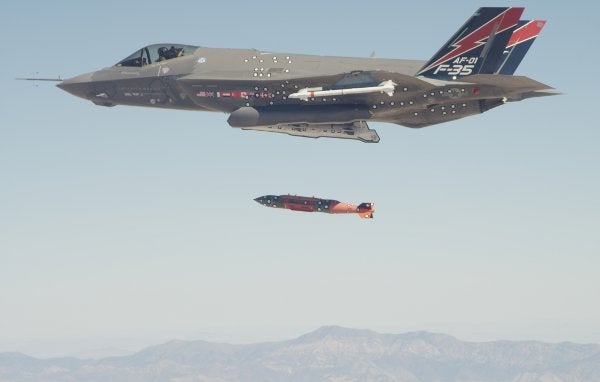 The weapon was carried internally, and the aircraft was flown by the USAF test pilot major Eric Schultz during the exercise, according to the company.

In its stealth configuration, the aircraft is designed to carry two bombs and an equal number of missiles on four internal weapon stations present in two weapon bays. A payload of up to 18,000lb is carried by the fighter using ten weapon stations in its normal configuration.

The CTOL variant is also capable of using an additional three external weapon stations that are located under each wing.

The aircraft has already completed successful night flight and external missiles testing, as well as the first in-flight refuelling mission in January, February and April 2012 respectively.

Undergoing flight tests since late 2006, the fighter is intended to replace the USAF’s existing F-16 Fighting Falcon and A-10 Thunderbolt II fleet from 2028.

The USAF has already started the aircraft’s operational utility evaluation (OUE) at Eglin Air Force Base in Florida, US, in September 2012.

An additional two JSF variants are also being developed, which includes a carrier variant (CV) for the US Navy and a short take-off and vertical landing (STOVL) aircraft for the US Marine Corps and the UK Royal Navy.