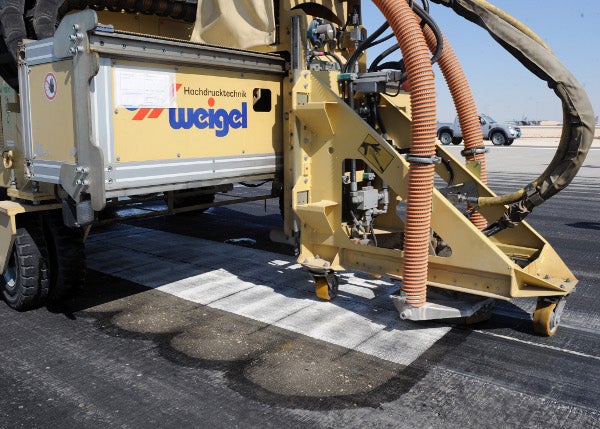 Representing the first C-130 Hercules deployable rubber removal system, the device includes two systems; the first uses a detergent to dissolve rubber from the runway prior to rinsing, while the second is an ultra-high pressure water system, the retrofitted Unimog.

The retrofitted Unimog features a TracJet attachment that puts out 36,000lb/in² of water pressure from the cleaning head to remove rubber and a vacuum system for the removal of debris and excess water.

US Air Force Central Command A7 captain Kathryn Miles said the retrofitted Unimog proves to be advantageous for airfield managers with busy runways.

"The system is designed to effectively clear rubber build-up that possesses potential risk to aircraft landing."

"The detergent process requires a six-hour uninterrupted runway closure. The Unimog, on the other hand, can be used between take-offs and landings and still effectively remove rubber," Miles added.

Despite flexibility, the ultra-high pressure water system is not designed to replace the detergent process, and instead will act as a supplement to it, according to Miles.

Personnel from the 1st Expeditionary Civil Engineer Group, 577th Expeditionary Prime BEEF Squadron and 557th Expeditionary Red Horse Squadron conducted two-week training of the system in operation and maintenance on any airfield in the US Central Command area of responsibility.