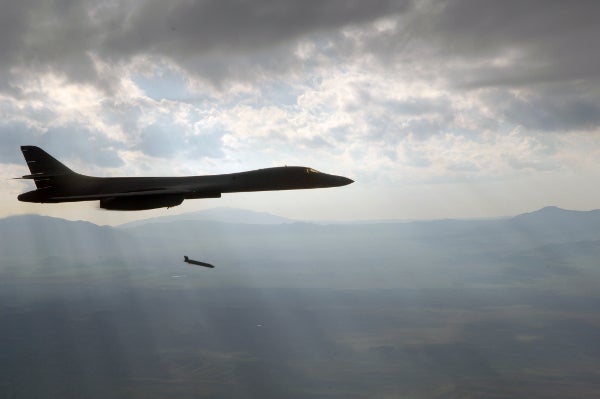 Lockheed Martin’s Joint Air-to-Surface Standoff Missile – Extended Range (JASSM-ER) is close to completing its final-phase of operational evaluations with the US Air Force (USAF) at Dyess Air Force Base in Texas, US.

The USAF’s 337th Test and Evaluation Squadron (337th TES) will complete the JASSM-ER’s final live flight test with the B-1 Lancer aircraft on 30 August 2012, drawing the missile closer to operational deployment aboard the bomber in late 2013.

"The B-1 is the premier aircraft to employ this new weapon due to the quantity we can carry, flexibility in terms of mission sets we take care of and targeting flexibility," Atkinson added.

"Also, JASSM shots can be either mission planned against fixed targets or can be retargeted dynamically in flight with waypoints, a feature unique to the B-1."

The JASSM-ER is a 2,000lb autonomous, long-range derivative of baseline JASSM, and is designed to destroy high-value, well-defended, fixed and re-locatable targets.

The JASS-ER features a new engine and larger fuel load capability, which extends the missile’s range to more than 500 nautical miles, compared to the JASSM that has a range of 200 nautical miles.

Equipped with an infrared seeker and GPS receiver, the stealthy JASSM-ER also features a dual-mode penetrator and blast fragmentation warhead, and is capable of cruising autonomously, day or night, in heavily degraded GPS environments.

Atkinson said: "One of the things the military relies heavily on is GPS, and we have demonstrated the ability to operate with intense GPS jamming. Even without GPS, the JASSM can find its target due to its internal sensor."

The JASSM-ER can be installed aboard the B-2 Spirit, B-52 Stratofortress, F-15 Eagle and F-16 Fighting Falcon, and is also certified for use on the Royal Australian Air Force’s F/A-18 Super Hornet aircraft.

Image: A USAF’s B-1 Lancer fires a JASSM-ER missile during operational testing at Dyess Air Force Base in Texas, US. Photo: courtesy of the US Air Force.