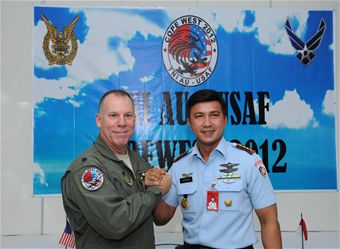 Throughout the exercise, which began on 25 June, a total of 80 US and 75 Indonesian airmen will exchange ideas related to airlift, air-land and airdrop missions, night and static flights and packing techniques.

The USAF has deployed three C-130 Hercules tactical transport aircraft, while Indonesia is participating with a single C-130 airlifter in the exercise.

Halim’s 1st Wing commander colonel Ardhi Tjahjoko was quoted by Antara News as saying that the two sides carried out a parachute dropping static and personnel to the Air Force Detachment in Gorda Serang, on the first day of the exercise.

CW12 374th Airlift Wing, Yokota Air Base, Japan mission commander and US Air Force captain John Chrampanis said: "We hope all the months of planning leading up to today result in a successful and safe exercise as we advance our partnership between the US and Indonesian Air Forces."

The combined training offered by CW12 is expected to prepare the two air forces to work jointly in offering humanitarian assistance and disaster relief, eventually promoting a peaceful Pacific region.

Conducted since 2009, the Cope West exercises aim to improve interoperability between the two nations.