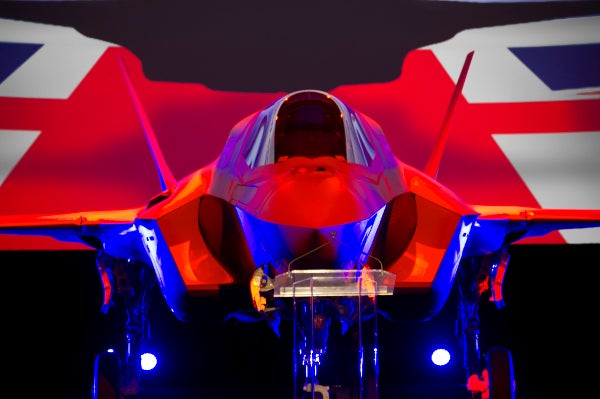 Designated BK-1, the aircraft is a short take off and vertical landing (STOVL) variant of F-35, and was formally accepted on 19 July 2012 by the British defence secretary Philip Hammond at the company’s Fort Worth facility in Texas, US.

After accepting the aircraft, Hammond said the F-35 is a hugely capable aircraft, and will provide the Royal Air Force (RAF) and Navy with "a world class fighting capability".

"Having taken decisions on the final designs of our new aircraft carriers and balanced the MOD’s budget, we can now proceed confidently to regenerating our carrier strike capability with these cutting-edge stealth combat aircraft," Hammond added.

The defence secretary also announced that the MoD is planning to order a fourth F-35 next year to help train pilots in flying the stealth fighter aircraft.

The new aircraft is equipped with the latest stealth and intelligence, surveillance, target acquisition and reconnaissance (ISTAR) technology, and is scheduled to be transferred to Eglin Air Force Base in Florida for US-led initial operational test and evaluation (IOT&E).

Expected to be based at RAF Marham in Norfolk, the aircraft will be used by both the air force and navy pilots, and will also be operated from at least one of the two future Queen Elizabeth-class aircraft carriers from around 2020.

Britain has initially ordered three fighters for test and evaluation purposes, at an estimated cost of more than £300m ($469.2m), to help replace its Harrier GR9 aircraft, which retired from service in 2010.

The second aircraft is currently undergoing test flights, and is scheduled for delivery next month, while the third will be handed over to the MoD in early 2013, as reported by Defense News.

Image: The UK’s first F-35B JSF during its handover ceremony at Lockheed’s Fort Worth facility in US. Photo: courtesy of Lockheed Martin Corporation.