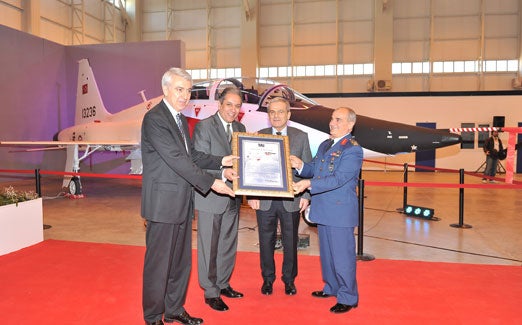 The delivery follows the previously awarded contract by the Undersecreteriat for Defense Industries (SSM) to design, develop and implement an avionics upgrade for the TurAF as a part of T-38 avionics modernisation (ARI) programme.

Under the contract signed in 2007, TAI will upgrade a total of 55 TurAF T-38A aircraft to extend its service life until beyond 2020.

As part of the modernisation programme, scheduled for completion in 2014, five aircraft are currently undergoing upgrade process at TAI’s facilities of which two are prototypes and three are production examples.

The remaining 50 production aircraft will be modernised at TurAF 1st Air Supply and Maintenance Center with technical support of TAI.

Powered by two General Electric-built J85-GE-5 turbojet engines, the aircraft is equipped with three fuselage bladder tanks and a dorsal bladder tank with a total capacity of 2,206 litres of usable fuel.

Over 500 T-38s are in service with the US Air Force and are also used by the air forces of Germany, South Korea and Taiwan.

Defense and Civil Spends on Helicopters in Malaysia: 2016 to 2024