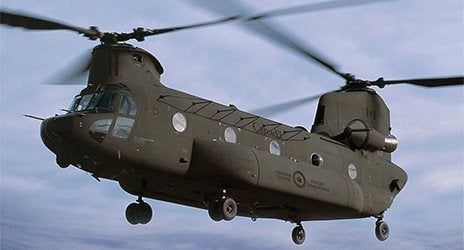 As part of a contract awarded by the Canadian Department of National Defence (DND) in June 2012, a special test equipment bench that includes aircraft survival equipment hardware along with Terma mission support tools is being provided by the company to the CFAWC.

DEWS is scheduled to provide the programme with a complete systems integration laboratory for duplication of an all aircraft-mounted AN/ALQ-213 (V) electronic warfare management system (EWMS), along with full simulation capability, for all defensive sub-systems installed on the aircraft.

The ALQ-213(V) EWMS, integrated with dual cockpit displays, are being provided by the company as part of a sub-contract awarded by the MHLH prime contractor, Boeing, in 2009.

A total of 15 CH-47F Chinook helicopters have been ordered by DND as part of a $1.15bn contract with Boeing in August 2009 for use during secondary search and rescue operations and emergencies, such as fires, floods and earthquakes.

Deliveries are expected to start from 2013, with the new fleet to be based at Canadian Forces Base Petawawa, Canada.