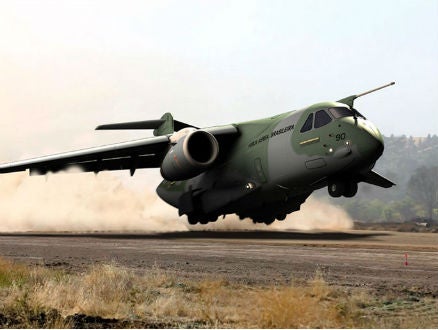 TenCate Advanced Armour has been selected by Aerotron Brazil to serve as its technical and industrial partner, as well as the supplier of materials and special processes for the KC-390 tanker aircraft development programme.

The two companies are collaborating to finalise the design and manufacture the ballistic protection prototypes according to the schedule, weight and performance requirements for the KC-390 aircraft, reports TenCate.

Under production by Embraer, the KC-390 is a medium-lift aircraft designed to conduct troop and cargo transport in Antarctic and Amazon regions, as well as aerial delivery, in-flight refuelling, search-and-rescue (SAR) and medical evacuation (MEDEVAC) operations.

Claimed to set a new standard for medium-sized military transport aircraft, in terms of performance and payload, and advance mission and flight systems, the twin-engine aircraft is expected to be capable of transporting up to 23t of cargo, including wheeled armoured vehicles, support equipment and personnel.

Around 28 KC-390s are currently being manufactured by Embraer as part of a $1.3bn contract awarded by the Brazilian Air Force (FAB) in April 2009, to help replace its existing fleet of 22 Lockheed Martin-built C-130E/Hs and KC-130 aircraft.

The initial test flight of the aircraft is expected to take place in 2014, while entry into operational service with the air force is planned for 2016.

Estimating the KC-390’s potential market to be approximately 700 aircraft, the company has to date signed letters of intent (LOA) for 60 aircraft with six different countries.