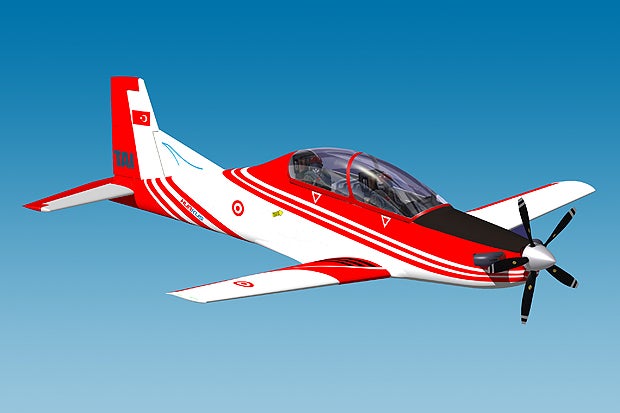 The Turkish Air Industry’s (TAI) first military and civilian use aircraft, Hurkus, is expected to roll out on 28 June 2012 with a ceremony.

Turkish Prime Minister, Recep Tayyip Erdogan, is expected to attend the ceremony where the aircraft will be unveiled, prior to its display at the Farnborough International Air Show.

The first Hurkus prototype was built adhering to EASA CS 23 standards and carries civilian use specifications, but upcoming prototypes will be built to military standards. The aircraft is expected to be used for basic pilot training, instrument flying, navigation training and weapons and formation training missions.

Hurkus includes an analog and digital cockpit with a tandem seat configuration, allowing both a student pilot and instructor to be seated. The aircraft’s glass cockpit has been lauded by engineers as being thin enough to break in case of emergency, but strong enough to protect the pilot from a bird strike at speeds of 300km/h.

The Hurkus development programme began in March 2006 as part of a contract signed by TAI and SSM for the design and production of four aircraft.

TAI hopes to export the aircraft as both a civilian and military flight trainer aircraft, but the date for its first flight is not yet known.

Defense and Civil Spends on Aircrafts in Singapore: 2016 to 2024