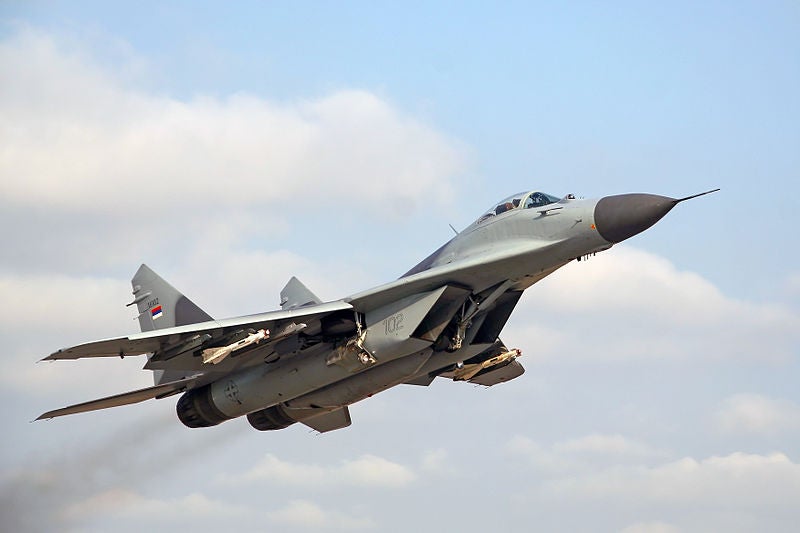 The Serbian Air Force is considering the acquisition of several MiG-29M/M2 Fulcrum fighter jets under a credit facility from Russia, the country’s first deputy prime minister and defence minister Aleksandar Vucic has revealed.

Vucic was quoted by RIA Novosti as saying that the final cost will be based on the type of onboard weapon systems as well as the volume of spare parts that will be acquired.

Without disclosing the number of aircraft that are scheduled to be purchased, Vucic said that the air force has already started training pilots to fly the aircraft.

Additional details of the agreement are scheduled to be made public during an official visit of Serbian president Tomislav Nikolic to Moscow on 21 May and Vucic’s visit from 23 to 24 May.

The deal could also be linked to modernisation of the country’s Moma Stanojlovic aircraft maintenance factory, which is set to become the regional servicing centre for the MiG aircraft family, Vucic noted.

Expected to close before the end of the year, the package will include a total of six MiG-29M/M2 fighters and two radar stations, as reported by Serbian media.

Powered by two RD-33 turbofan engines, the aircraft has been developed in several variants, such as Mikoyan MiG-29M and naval variant Mikoyan MiG-29K, and can be also be modified to use a broad spectrum of air-to-surface armaments and precision munitions.

Around three MiG-29s and one MiG-29UB fighters were operational with the Serbian air force as of April 2012.

The aircraft is also in service with the air forces of Algeria, Bangladesh, Belarus, Germany, Hungary, India, Iran, Kazakhstan, Malaysia, North Korea, Poland, Syria, Ukraine and Russia, among others.