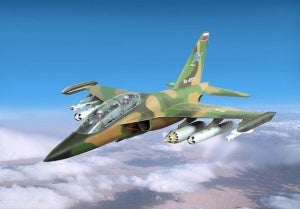 Russia will not deliver a previously agreed order of 40 Yak-130 fighter planes to Syria, according to a senior Russian official.

Russian news agency RIA has quoted deputy director of the Russian service for military co-operation Vyacheslav Dzirkaln as saying "while the situation in Syria is unstable, there will be no new deliveries of arms there."

"In the current situation talking about deliveries of airplanes to Syria is premature," Dzirkaln said speaking to journalists at this year’s Farnborough Air Show in the UK.

The order refers to a shipment of 40 Yak-130 fighter planes agreed between Syria and a Russian arms manufacturer in late 2011.

The reports indicate a change of direction for Moscow, after the Russian Foreign Minister said on June 9 that his country would only send weapons to Syria under previously signed contracts.

According to official CAST estimates, Syria has signed arms contracts for about $5.5 billion with Syria since 2006.

Russia came under strong criticism last month from U.S. Secretary of State Hillary Clinton after it was alleged that a shipment of Mi-25 attack helicopters were on the way from Russia to Syria.

Russia responded that the helicopters were not new but had been overhauled under a previous agreement.

"As already stated, no new deliveries are being made to Syria of Russian military helicopters," the Foreign Ministry statement said, adding "all military-technical cooperation with Syria is limited to defensive weapons."

The Yakovlev Yak-130 is a subsonic jet aircraft developed by Yakovlev for the Russian government in 1991.

Russia: Falling Voice Revenue and Macroeconomic Uncertainty to Slow the Growth of the Telecom Market

The Unmanned Aerial Vehicle Market in Russia to 2025: Market Brief