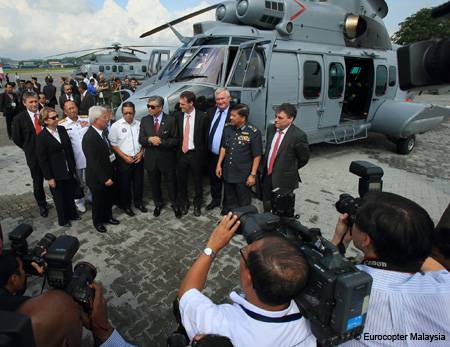 The first helicopter, which was unveiled to Malaysia in December 2011, was delivered on time, while the second has been handed over three months ahead of the original schedule.

Eurocopter Sales and Customer Relations senior vice president Olivier Lambert said: ”This delivery milestone is the result of the collective effort and great co-operation between the teams from Royal Malaysian Air Force and Eurocopter working towards a common goal.”

A total of 12 EC725 helicopters were ordered by the RMAF in 2010 to replace its Sikorsky-built S-61A-4 Nuri helicopter fleet, which is used for conducting search and rescue (SAR) and utility missions.

The remaining helicopter deliveries are scheduled to be completed by January 2014. Eurocopter is implementing a series of strategic cooperation projects with local companies to support timelines.

Projects include the integration of local industry into Eurocopter’s global supply chain, the establishment of joint ventures for the creation of an in-country maintenance, a repair and overhaul (MRO) facility, as well as the development of a regional full-flight simulation (FFS) centre.

Located at Sultan Abdul Aziz Shah Airport in Selangor, the FFS centre is primarily intended for use by RMAF aircrew, and will also be made available for other military and civilian EC725/EC225 helicopter operators in the Asia Pacific region.