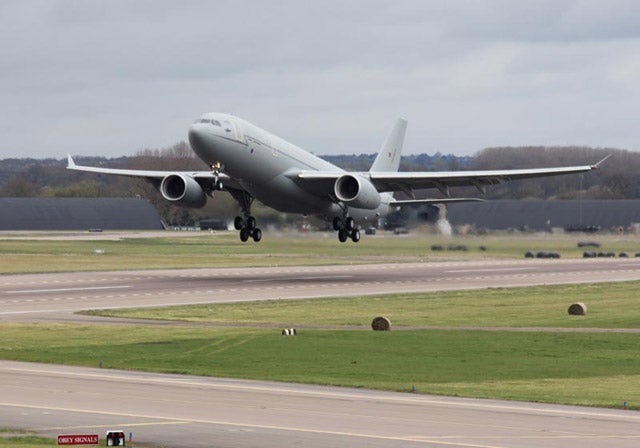 The training sortie was aimed to familiarise the AirTanker crew with the aircraft and achieve the first part of the MRTT crew training schedule.

Airbus Military Derivatives Programme Director Antonio Caramazana said that it was a proud day for everyone involved with the A330 MRTT programme to see the Voyager in service with the RAF.

Developed from the civilian Airbus A330-200, the A330 MRTT features standard in tanker/transport technology and is designed to perform as a dual-role air-to-air refuelling without any additional fuel tanks and transport aircraft.

The A330 MRTT aircraft, also known as Voyager in RAF service, is the only aircraft able to simultaneously perform three different types of missions including aerial refuelling, passenger or freight transport, and medical evacuation (MEDEVAC) missions.

Powered by two General Electric CF6-80E engines, the A330 MRTT with wide-body fuselage can also be used as a transport aircraft to carry 300 passengers or a payload of up to 45t (99,000lb).

The Voyager aircraft is claimed to be quieter and fuel-efficient than any other aircraft, which are currently in service with the RAF.

Under the FSTA programme, the RAF will receive 14 A330-200-based tanker transports through a private finance initiative deal with the AirTanker consortium replace Lockheed’s TriStars and Vickers VC10s by 2013.

The first two Voyager aircraft have been modified by Airbus Military in Spain and all 14 modified A330s are expected to be operational with the RAF by mid-2016, according to Flightglobal.

A total of 28 A330 MRTTs have been ordered by four customers that includes Australia, Saudi Arabia, and the United Arab Emirates.

Defense and Civil Spends on Aircrafts in the United Kingdom: 2016 to 2024