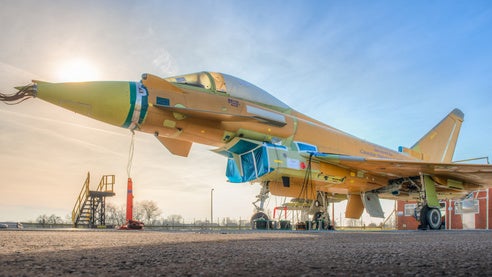 Scheduled to last for about eight weeks, the EMC testing aims to ensure safe and correct operation of the aircraft’s systems, such as armament, fuel and flight controls, on exposure to radio frequency transmissions, including ground radars or TV and radio transmission masts during flight.

The testing is conducted using a direct current injection technique, which includes injection of simulated threat signals directly into specially designed points on the aircraft’s nose, tail and wing tips.

The aircraft had completed final assembly with initial testing at the company’s facility in Warton, Lancashire, UK, in late 2012.

"Scheduled to last for about eight weeks, the EMC testing aims to ensure safe and correct operation of the aircraft’s systems."

Avionics testing and engine ground runs of the aircraft are scheduled to be carried out in the next few months.

A total of 112 aircraft ordered by four Eurofighter partner nations, including Germany, Italy, Spain and the UK, as part of the €9bn Tranche 3A contract awarded in June 2009.

Around 40 Typhoon aircraft will be delivered to RAF, 31 to Germany, 21 for Italy and 20 to Spain.

Typhoon covers serial production of 559 aircraft in three tranches for the air forces of Austria, Italy, Germany, Saudi Arabia, Spain and the UK. Deliveries of Tranche 3A Typhoons to RAF are expected to commence in late 2013.