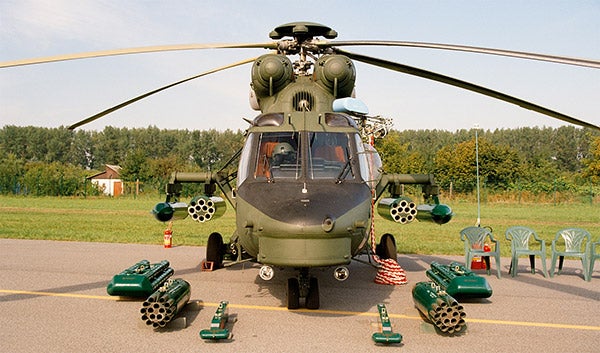 PZL-Swidnik has handed over the final two W-3A Sokol multipurpose combat helicopters under contract to the Philippine Air Force (PAF) at Clark Air Base near Manila, Philippines.

Ferried onboard an An-124 Ruslan large cargo aircraft from Lublin Airport, Poland, the helicopter delivery follows a PHP2.8bn ($60.6m) government-to-government contract, secured by the company in June 2010, to supply a total of eight helicopters to the air force.

Signed as part of the air force’s modernisation programme, the contract also included delivery of ground support equipment and spare parts, as well as support services and training for aircrew and maintainers.

PZL-Swidnik Management Board president Mieczyslaw Majewski said the company hopes to expand its partnership with the air force through the provision of technical support and ongoing operational support for the helicopters.

Philippine Air Force spokesman Miguel Ernesto Okol was quoted by Philstar.com as saying that the helicopters will greatly improve the service’s search and rescue (SAR) capability.

The first batch of four helicopters was delivered in February 2012, while the second, comprising of two aircraft, was handed over in November 2012.

Flown by the company trained pilots of the 505th Search and Rescue Group, the helicopters have proven to be highly-effective and reliable when operating in challenging conditions.

Powered by two WSK PZL-Rzeszow PZL-10W turboshaft engines, the W-3A Sokol is a medium-size helicopter primarily designed to deliver combat support for the armed forces, as well as to destroy fixed and moving armoured targets and hostile troops.

PAF Sokols are integrated with the latest navigation and avionics systems, such as four-axis autopilot, an electronic flight instrument system (EFIS) and night vision goggle (NVG) compatible cockpit enabling operations during day and night in all weather conditions.

Capable of flying 734km or staying airborne for more than four hours, the 6t helicopter can transport up to 11 troops in the cabin or lift up to 2,100kg using its external cargo hook.

Image: A W-3 Sokol combat helicopter on display at the 2005 Radom Air Show in Poland.