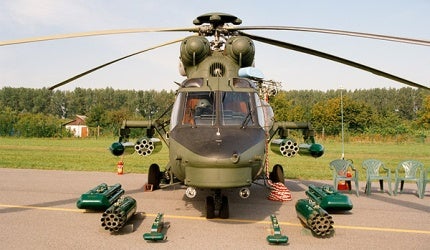 The W-3 Sokol (Falcon) multi-purpose combat helicopter is manufactured by PZL-Świdnik, an AgustaWestland company. The W-3 military version was designed to deliver combat support for the armed forces. It can destroy fixed and moving armoured targets as well as hostile troops.

The design of the W-3 Sokol combat helicopter was based on the inputs from the Polish Air Brigade’s combat operations in Iraq. The development was complemented by the Polish Armed Forces and the Polish defence industry.

The helicopter received type certificates from the Aviation Authorities of Poland, Russia, US, Germany and Spain according to the FAR Part 29 airworthiness standards.

In January 2012, the Polish Ministry of National Defence signed a contract with PZL-Świdnik for the supply of five W-3WA Sokol VIP transport helicopters.

In January 2012, the Polish Ministry of National Defence signed a contract with PZL-Świdnik for the supply of five W-3WA Sokol VIP transport helicopters. The contract also covers the upgrade of 14 other helicopters of the Polish Armed Forces.

The Philippine Air Force placed an order with PZL-Świdnik for eight W-3 Sokol helicopters in June 2010. The first batch of four helicopters was delivered in February 2012. Two more helicopters were handed over in November 2012. Deliveries of the remaining helicopters will conclude by early 2013.

W-3 Sokol incorporates a conventional design based on the pod and boom layout. The fuselage is of Duralumin construction, while rotor blades and stabiliser are made of laminated glass fibre reinforced plastic (GFRP).

The helicopter can house two crew and up to 12 passengers. Both sides of the flight deck has a door with a bulged window. Two large sliding doors, one at the forward end of cabin on the port side and another at the rear of cabin on the starboard side, allow the loading and unloading of cargo and passengers.

The helicopter is fitted with a wide range of equipment and systems such as a rescue hoist, cargo hook, engine air particle separator (EAPS) system, rappelling system and a wire strike protection system.

The T129 is a twin engine multi role attack helicopter being designed and manufactured jointly by Turkish Aerospace Industries (TAI) and Italy-based AgustaWestland to meet the requirements of Turkish Armed Forces.