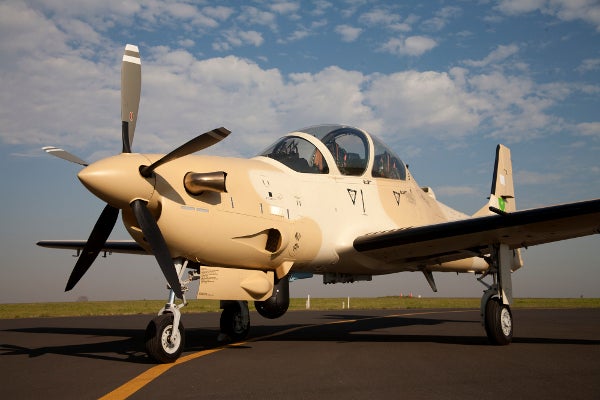 The Mauritanian Air Force has taken delivery of its first A-29 Super Tucano light attack and advanced training aircraft under contract from Embraer Defense and Security at its facility in Gaviao Peixoto, Sao Paulo, Brazil.

The delivery follows an undisclosed contract announced by the company during the FIDAE defence and air show in March 2012, for the delivery of aircraft to support the air force’s border surveillance missions.

Featuring an advanced electronic/optical/infrared (EO/IR) and laser technology, secure radios with datalink communications and weaponry, the aircraft can also be configured for pilot training purposes.

The aircraft is capable of operating in high temperatures and humid conditions, and can be equipped with fourth-generation avionics and weapons systems to fire precision guided munitions.

The aircraft is also in operational service with the air forces of Brazil, the Dominican Republic, Colombia, Ecuador, Chile and Burkina Faso, Indonesia, and has been ordered by Angola and Guatemala.

The Mauritanian Air Force currently operates four second-hand Embraer EMB-312F aircraft that were acquired from the French Air Force in 2011.