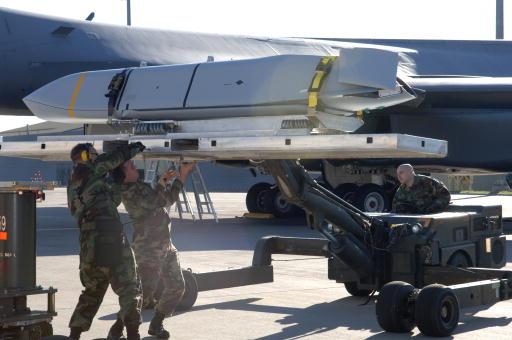 ”We are on schedule to support the operational requirements of the Finnish Air Force’s F-18 mid-life upgrade effort,” Adams added.

The missile’s capabilities and proven reliability will play a significant role in helping Finland achieve its national defence objectives.

Airworthiness activities under the contract are scheduled to be carried out at Naval Station Patuxent River in Maryland, US, followed by flight testing at the Naval Air Warfare Center Weapons Division in China Lake, California, US.

Equipped with an infrared seeker and a GPS receiver to aim specific targets, JASSM is a 2,000lb autonomous, long-range, air-to-ground, precision standoff missile, designed to destroy high-value, well-defended, fixed and re-locatable targets in the battlefield.

More than 1,200 JASSMs have been manufactured by Lockheed to date at its manufacturing facility in Alabama, US, for testing and operational use, with a total objective of 4,900 missiles.

Image: USAF technicians prepare to load a JASSM missile into a B-1 Lancer at Ellsworth Air Force Base in South Dakota, US. Photo: US Air Force photo by Airman 1st Class Angela Ruiz/Released.

Future of the Finnish Defense Industry - Market Attractiveness, Competitive Landscape and Forecasts to 2023

Future of the Finland Defense Industry - Market Attractiveness, Competitive Landscape and Forecasts to 2022