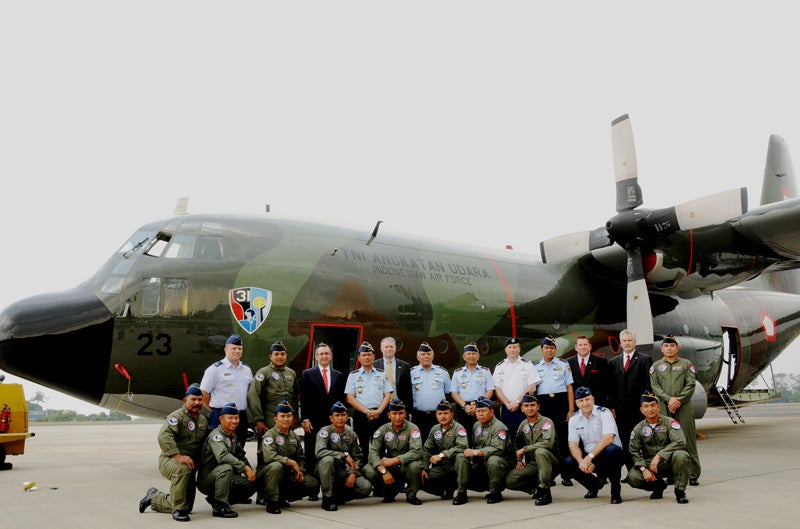 ARINC has delivered the upgraded C-130H Hercules transport aircraft to the Indonesian Air Force at Halim Air Force Base (AFB) in Jakarta, Indonesia, as part of a programmed depot maintenance (PDM) project.

The delivery follows the previously awarded contract to ARINC to upgrade C-130H Hercules aircraft for the Indonesian Air Force under the US Air Force’s foreign military sales (FMS) programme.

The 30-year-old C-130H transport aircraft has undergone significant structural and systems repair work at the company’s facility in Oklahoma City, US.

The upgraded C-130H aircraft will support the air force in conducting humanitarian aid and rescue missions in the Indonesian region, which are prone to earthquakes and flooding, while providing enhanced airlift capability.

The C-130J Hercules is a Lockheed Martin-built, heavy-lift tactical cargo and personnel transport aircraft that is powered by four Allison AE2100D3 turboprop engines and can accommodate a payload of up to 20t or more than 90 passengers.

Indonesia has been flying the C-130 models since 1960 and used the aircraft extensively during Operation Padang Assist in South Sumatra in 2009, and Operation Sumatra Assist I & II in 2004-2005.

The nation is also procuring 24 Lockheed F-16A/B Fighting Falcon jet fighters, which will be upgraded from the Block 25 standard to the Block 32 standard, and six Russian Sukhoi Su-30MKK aircraft, in addition to nine NC-295 medium transport aircraft from Airbus Military.

The PDM programme aims to enhance the bilateral relationship between US and Indonesia.