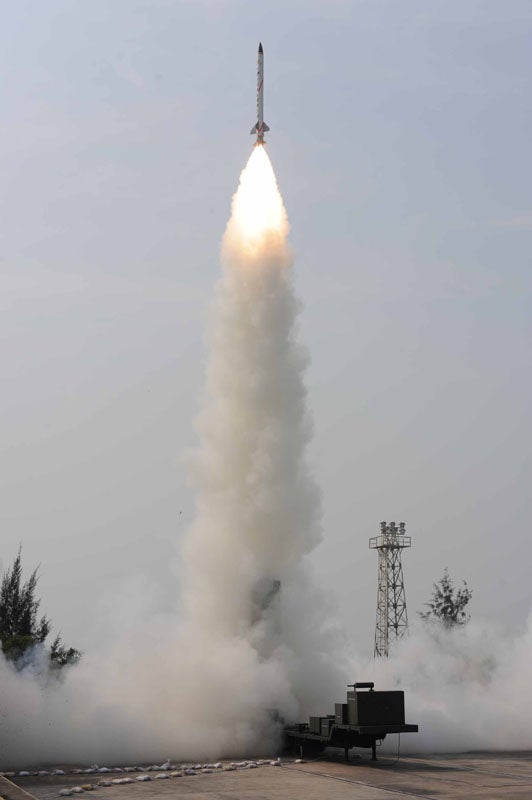 Scientists from India’s Defence Research and Development Organisation (DRDO) have successfully tested the endo-atmospheric interception capabilities of an interceptor missile.

Following its launch from Launch Complex III of Integrated Test Range (ITR) at Chandipur in Orissa, India, the interceptor travelled at a supersonic speed of 4.5 Mach and successfully intercepted an incoming enemy ballistic missile, a modified variant of the Prithvi surface-to-surface missile.

The inertial navigation system-guided missile was directed towards the target by an onboard computer, following which its warhead exploded and destroyed the target missile at an altitude of 14.7km in endo-atmosphere.

A multiple target destruction with multiple interceptor concept was also demonstrated with almost parallel interception of a hostile electronic target by an electronic interceptor missile at 120km in exo-atmosphere.

The trajectory of all four missiles was tracked by radar during the test firings, which also validated the capabilities of the target’s ring laser gyro based navigation system, fibre optic gyro based INS in interceptor, onboard computers, guidance systems, actuation systems and radio frequency seekers.

The first phase of the system will be deployed in 2013-14 timeframe to counter enemy ballistic missiles of up to 2,000km range, Saraswat added.

Launched from an 8×8 Tatra transporter-erector, the interceptor is a 7m-long single-stage solid rocket-propelled guided missile designed for endo-atmospheric interception of ballistic missile targets at altitudes of up to 30km.

Image: the Advanced Air Defence missile during its latest test firing from Wheeler’s Island in Odisha, India. Image courtesy of the Government of India.

The Missiles and Missile Defense Systems Market in India to 2025: Market Brief