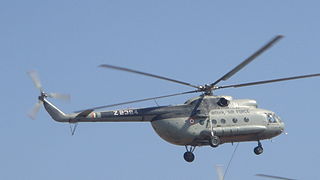 As part of the contract, awarded by Kazan Helicopters, Telephonics will deliver a total of 85 RDR-1600 radars.

Telephonics chief operating officer Kevin McSweeney said: "Being chosen by Kazan and the Indian Air Force for the second time demonstrates the effectiveness and reliability of the RDR-1600 in challenging environments."

Around 93 units of the airborne, weather avoidance and surveillance radar were successfully integrated earlier in support of the IAF Mi-17V-5 helicopters.

"As part of the contract, awarded by Kazan Helicopters, Telephonics will deliver a total of 85 RDR-1600 radars."

Equipped with a loading ramp instead of clam-shell doors, the aircraft is fitted with an additional door, a new dolphin nose and can transport up to 35 members.

Expected to start deliveries to Kazan in early summer 2013, final deliveries are set to be completed in 2014.

Image: The Indian Air Force’s Mi-8 will be replaced with Mi-17V-5 helicopters. Photo courtesy of Pritishp333.