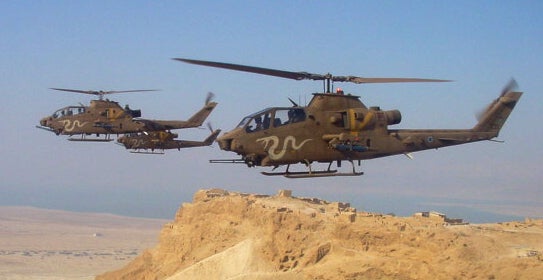 The Israeli Air Force (IAF) is planning to purchase precision rockets for its fleet of helicopters, which are used frequently for airstrikes in the Gaza Strip, in a bid to improve its accuracy in urban warfare.

IAF officials were quoted by The Jerusalem Post as saying that the requirement for a guided rocket was issued in an effort to improve its level of accuracy and lower costs by moving away from the expensive Hellfire air-to-surface missile.

A senior IAF official said: "Our enemies hid inside urban settings and we need to be as accurate as possible in our operations."
The newly purchased rockets will be used by the IAF’s Apache AH-64D and AH-1Cobras attack helicopter fleet.

Designed for air-to-ground or ground-to-ground missions, the GATR uses a laser homing seeker to achieve accuracy against soft or lightly armoured stationary or fast-moving targets.

The rocket can be launched from a variety of platforms, providing high kill probability at ranges of 1 to 8km with very low collateral damage.

Capable of launch from helicopters, the Spike Extended Range Anti Tank Guided Weapon (ATGW) is the extended long-range version of the Spike family, capable of defeating tanks at a range of up to 8kms.

Using a day seeker or day/night seeker, Spike-ER retains the dual operation modes of Spike- fire-and-forget & fire-observe and update, and has the ability to update and switch targets following launch.

The IAF requirement has risen as the Israeli Defense Forces (IDF) are also moving forward with plans to equip its Artillery Corps with precision rockets to boost its strike capabilities ahead of future conflicts with Hezbollah in Lebanon or Hamas in the Gaza Strip.