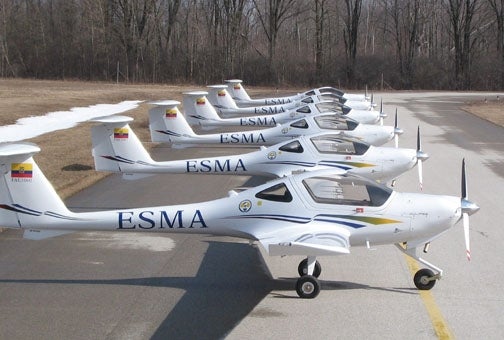 The Ecuador Air Force (FAE) has received the first six of twelve DA20-C1 aircraft from Diamond Aircraft at the company’s facility in London, Ontario, Canada.

The delivery follows a previously awarded contract to Diamond Aircraft to provide a fleet of 12 DA20-C1 aircraft for pilot training, awarded in November 2011.

Under the contract, the company will also provide complete programme support including supply of spare parts and on-site support, along with flight instructor and maintenance training.

The DA20-C1 aircraft will be used to train rookie pilots at Cosme Rennella training academy at Salinas Air Base in Salinas, Ecuador to support the successful operational deployment of the fleet.

The FAR Part 23-certified DA20-C1, based on the HK36 Super Dimona, features control sticks, composite construction, a canopy, low-mounted wings, a single fuel tank, a T-tail, and a castering nosewheel.

The two-seat tricycle gear general aviation aircraft’s canopy design will increase the cockpit’s initial temperature by allowing an above-average amount of sunlight into the cockpit.

The aircraft is also available with instrumentation and avionics suitable for flight under instrument flight rules (IFR) but does not qualify for IFR certification due to its plastic airframe lacks lightning protection.

The first DA20 aircraft, also known as A1 Katana, was produced in Canada in 1994 and is powered by Rotax 912 engine.