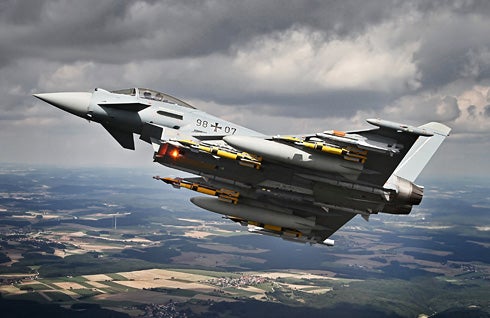 Jointly carried out with BAE Systems and Alenia Aermacchi on the instrumented production aircraft (IPA) 4 and 7, the intensive test programme confirmed that the enhancement is capable of delivering a robust simultaneous multi-/swing-role capability to the member air forces.

"Deploying multiple weapons with attack constraints simultaneously in all weather has never been easier," Worning said.

Pursued with funding of £458m from the UK, Spain, Italy and Germany, the P1E programme includes the installation of a broad spectrum of enhancements, including air-to-surface and air-to-air systems to boost the Typhoon’s capabilities.

"The Phase 1 enhancements will provide a significant leap in Eurofighter’s operational capabilities."

The enhancement is scheduled to be handed over to the partner air forces as a new software release in late-2013.

Manufactured by a consortium of EADS, Alenia Aeronautica and BAE, the Typhoon is a twin-engine, canard-delta wing, multirole fighter designed for deployment during air operations, including air policing, peace support and high-intensity conflict missions worldwide.