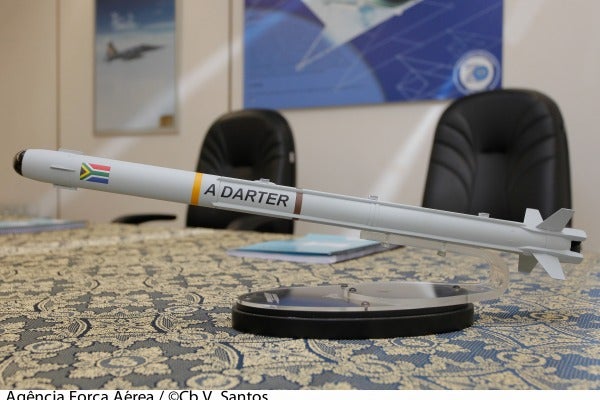 Denel do Brazil has received a contract from the Brazilian Air Force (FAB) to prepare its Sao Jose dos Campos facility for large-scale production of the A-Darter short-range air-to-air missile (SRAAM).

Valued at R1.4m ($0.67m), the contract includes the construction of an industrial park at Sao Jose dos Campos for the missile, which is currently undergoing final testing and is close to entering full-scale production.

”The technology we had previously was third-generation; this is a major leap, and we will now move to a fifth-generation missile," Paula added.

Led by Denel Dynamics, the A-Darter missile development programme was initially started by South Africa in 1995, and was joined by Brazil as co-owner of the missile’s intellectual property rights in 2006.

Scheduled to replace the MAA-1 Piranha missile on the FAB’s AMX-1 subsonic strike fighters, the missile will also be installed onboard the F-X2 next-generation fighter aircraft from 2015.

The South African Air Force (SAAF) is expected to integrate the missile into its 26 Saab Gripen fighter and 24 Hawk Mk120 jet fleet.

All missiles to be purchased by FAB, along with export components will be manufactured at San Jose dos Campos, in collaboration with local companies, including Mectron, Avibras and Opto Electronic, according to Paula.

Weighing 90kg, the A-Darter, also dubbed V3E Agile Darter, is a 2.98m-long fifth-generation SRAAM designed to counter a wide range of aerial targets in the battlefield.

Image: The A-Darter missile is capable of flying up to ten times faster than a fighter aircraft. Photo: courtesy of Agencia Forca Aerea/©ChV Santos.