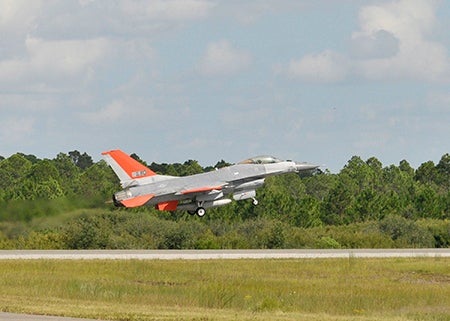 The US Air Force (USAF) has completed the first unmanned test flight of the Boeing-built QF-16 full scale aerial target (FSAT) drone at Tyndall Air Force Base in Florida, US.

Involving auto takeoff, a series of simulated manoeuvres and supersonic flight, as well as an auto land, the milestone flight initiates additional operational evaluations, including a live fire test at Holloman Air Force Base in New Mexico, US.

During testing, the drone was remotely flown by two USAF test pilots in a ground control station (GCS).

Commenting on test flight, US Air Force 82nd Aerial Targets Squadron commander lieutenant colonel Ryan Inman said: "It was a little different to see an F-16 take off without anyone in it, but it was a great flight all the way around.

"Now we have a mission capable, highly sustainable full scale aerial target to take us into the future."

A modification of the USAF’s retired F-16 Fighting Falcon fighter aircraft, QF-16 is designed to serve as a realistic FSAT for newly developed air-to-air weapons’ developmental and operational testing by the US and allied militaries in a safe and controlled environment.

"It was a little different to see an F-16 take off without anyone in it, but it was a great flight all the way around."

Capable of operation in either manned or unmanned modes, the supersonic, reusable drone is equipped with flight termination and visual augmentation systems to realistically replicate fourth-generation threats like the Russian Mikoyan MiG-29 Fulcrum or Sukhoi Su-27 Flanker fighters.

The drone is scheduled to replace the air force’s existing BAE Systems-built Q4-F FSAT fleet, which will retire from operational service by 2015.

Having received an initial $69.7m QF-16 engineering, manufacturing and development (EMD) contract in March 2010, Boeing has modified six F-16s into the QF-16 configuration.

The QF-16 low-rate initial production (LRIP) is scheduled to commence during the fourth quarter of this year, with first deliveries in 2015.

Image: The QF-16 FSAT drone during its first unmanned flight test at Tyndall Air Force Base in Florida, US. Photo: courtesy of US Air Force, by master sergeant J Scott Wilcox.