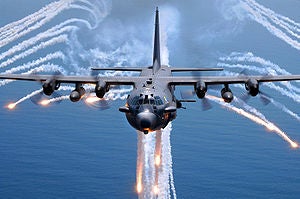 Boeing has been awarded a contract for the supply of components to complete the installation of 25mm Ammunition Storage and Handling Systems (ASHS) on the US Air Force’s (USAF) four AC-130U gunships.

Under the first $4.6m delivery order of the original $11.4m indefinite delivery, indefinite quantity (IDIQ) contract, the company will also provide spare parts to support sustainment of the ASHS.

With a capacity of 3,000 rounds, the ASHS is compatible with GAU-12/U Gatling guns and can also feed ammunition to the 25mm cannons located inside the aircraft’s cargo hold.

Boeing has been the prime maintainer of the ASHS since 1994 and also provided five major subassemblies for building six ammunition storage systems under the $11.1m contract, initially awarded in October 2011.

A heavy-armed ground-attack aircraft variant of the C-130 Hercules aircraft, the Lockheed AC-130 gunship is used by the USAF to conduct close air support, air interdiction and force protection missions including defending air bases and other military facilities.

The AC-130U is equipped with the AN/APQ-180 synthetic aperture radar for long-range target detection and identification and also features Inertial Navigation Systems (INS) and a Global Positioning System (GPS) for accurate target tracking.

The gunships have been used by the USAF during Operation Enduring Freedom in Afghanistan and Operation Iraqi Freedom in Iraq and also by US Special Operations forces during attacks on suspected al-Qaeda militants in Somalia in 2007.

Manufacturing of the parts will commence immediately at Boeing Fort Walton Beach facility and the components will be delivered to Robins Air Force Base, in Georgia, US in December 2012.