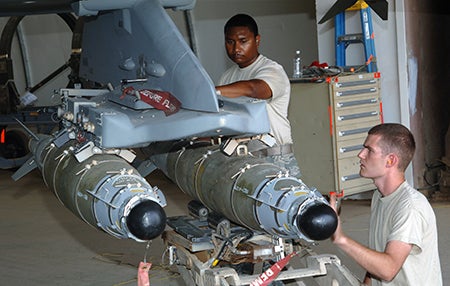 The US Air Force has awarded a $126m contract to Boeing for the supply of an additional 5,000 Joint Direct Attack Munition (JDAM) tail kits.

The USAF contract is the third for conventional JDAM kits within a year. The first $88m contract for 3,500 was awarded in January 2011, and the second $92m contract for an additional 4,000 kits in March 2011. The modular low-cost guidance kit converts existing unguided bombs into precision-guided weapons and allows for a variety of technological upgrades such as wing kits to offer three times the range, improved immunity to GPS jamming and an all-weather radar sensor.

Boeing Direct Attack Weapons director Kristin Robertson said that the laser kits are employed by the USAF and US Navy every day in combat.

"It has been incredibly effective in attacking important moving targets accurately and reliably, with minimal collateral damage. Adding the laser sensor to the conventional JDAM kit is an affordable option that’s easy for ordnance crews to install and very straightforward for pilots already familiar with JDAM," Robertson said.

The kits, declared as an urgent operational need in early 2007, completed the development and testing cycle in less than 17 months. The first production laser sensor kits were delivered to the USAF in May 2008 and were successfully employed in Iraq in August 2008.

Deliveries under the contract are scheduled to commence in June 2013 and will run through May 2014. More than 230,000 JDAM tail kits have been built by Boeing for use by 26 international militaries since production began in 1998.