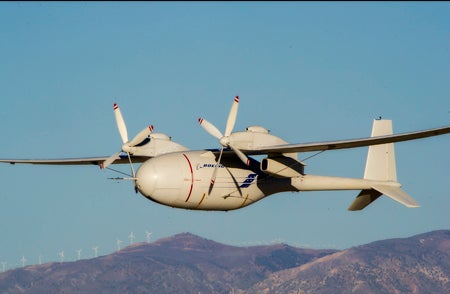 Phantom Eye had remained aloft for 28 minutes, at speeds of up to 62k, after reaching an altitude of 4,080ft during the first test flight in June 2012.

View All
"Phantom Eye is a high-altitude long-endurance (HALE) designed to assist the US military."

"No other system holds the promise of offering on-demand, persistent ISR and communications to any region in the world, rapidly responding to natural disasters and national security issues," Davis added.

The UCAV had successfully completed taxi testing at Edwards AFB earlier this month.

Designed and manufactured by Boeing Phantom Works under a self-funded programme, Phantom Eye is a high-altitude long-endurance (HALE) designed to assist the US military in conducting ISR missions in Afghanistan.

Featuring a wing-span of 150ft, the fixed-wing UAV will cruise at 150k, carry up to 450lb and stay aloft at altitudes of 65,000ft for up to four days, while performing surveillance across a large area.